Home » Studio Computers » What is MIDI? A Guide to the MIDI Format 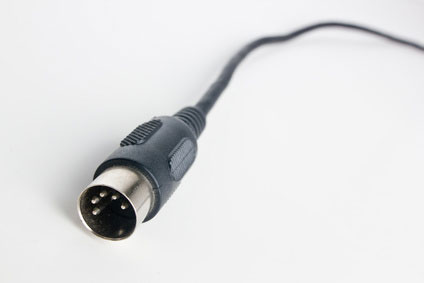 The question ‘what is MIDI?’ still gets asked by lots of different people who want to get into music production. These days, MIDI is one of the most important ingredients of a home studio setup and has been for the past thirty years since it was introduced.

MIDI stands for Musical Instrument Digital Interface, and the MIDI format is one of the reasons behind the growth of home recording and music production studios. In simple terms, MIDI allows various digital devices to connect and communicate with each other, such as:

These devices are connected together with MIDI cables, a 5-pin DIN plug as shown here.

In the early 1980s, MIDI was taken on by the recording industry and instrument manufacturers, and it became a system that could be used across all models and makes of devices used in the studio. This allowed the system to work well and consistently across all studios, something engineers and producers have been grateful for ever since.

I must point out something here – it’s important to know that MIDI doesn’t actually contain or transmit any sound of its own. The MIDI format relates to the digital data generated when notes, knobs, and sliders are used to play and control sounds – this MIDI data is recorded into a sequencer.

The data can then be sent to other MIDI-compatible devices that actually produce sound – these can vary from hardware synthesizers all the way to drum programs inside a computer. The main parameters that MIDI can control are:

MIDI can also control factors such as:

The devices that produce the actual sound are known as ‘sound generators‘. Each device can contain hundreds, even thousands of different instrument and synthesizer sounds, ranging from guitars, drums, and keyboards through to a wide variety of orchestral sounds and beyond. These sounds, known as ‘patches‘, can be also be edited and changed, and then saved inside the sound generator’s memory bank.

Each MIDI cable is able to send 16 separate channels of MIDI data. So, for example, if you’re producing a track that uses 30 different MIDI sounds, you would need 2 MIDI cables to transmit all of the data – 16 MIDI sounds on one cable, the other 14 on another MIDI cable.

This inbuilt limit means that many MIDI cables are usually needed inside one studio. To help control the amount of connections and keep the system as simple as possible, we can use a MIDI interface. One of the most popular is the MIDIsport, from M-Audio.

Known as MMC, this is the name for the digital system that allows separate devices in the studio to be controlled by one master device – usually transport controls like play, stop, fast-forward and rewind, that are sent through MIDI connections in the studio.

Everything from digital audio workstations, control surfaces, and hard disk recorders can be controlled from this one place, whether from a hardware device or from the main studio computer.

The potential range of sounds that MIDI can bring to our home studio is huge. So what is MIDI? It’s simply a system that makes it possible for writers and producers to easily create music from a wide variety of sounds, all within the one studio.

The introduction of MIDI, I think, was one of the most important developments in the world of music production.

How Audio Latency Can Affect Your Recording and Mixing
How to Set Your System Up for Computer Music Production
What is a Digital Audio Workstation?
Use a FireWire or USB Computer Audio Cable for Quick Connections