Home » Gear » What Is An Audio Interface And What Does It Do? Here’s A Simple 9-Point Checklist 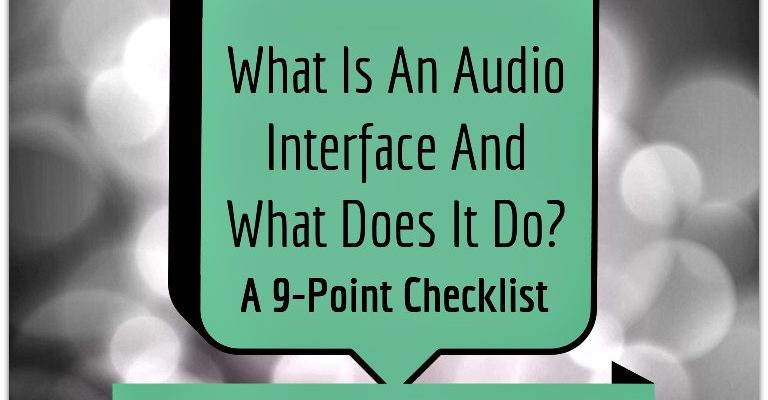 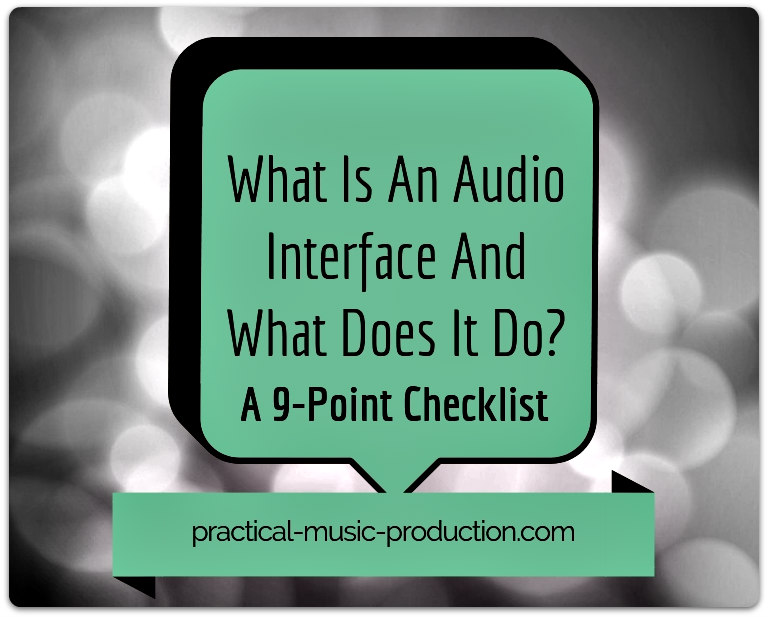 The audio interface is the bridge between your computer and the rest of your recording equipment.

To create and produce your own music you’ll need to record sounds into your studio computer’s DAW, and you’ll also need to listen back to the music through your studio monitors. All of this, and a whole lot more, is managed by the interface.

But before you dive in and invest in one, you need to get the low-down on the specific benefits and features you’ll find on a standard interface. I’ve created a 9-point checklist that runs through all of the important details for you, so you can quickly find out what you need to know and why you need to know them.

How Does An Audio Interface Work?

Every audio interface will include key features that perform certain tasks for you in the studio. Here are the nine most important aspects and a brief outline on what each one will do for you. All of the features are as important as each other if you want your interface to be as strong as it can be.

These are the connections for your microphones, using 3-pin XLR microphone cables. They can also carry +48V of phantom power for condenser mics.

Ideally you’ll want to get an audio interface with at least 2 mic inputs. You can then record two high-quality inputs at the same time – for example, vocals and an acoustic guitar, or two microphones on the same guitar amp.

The more expensive interfaces will usually have more mic inputs. The extra costs come from the extra mic preamps that have to be built into the interface – preamps aren’t cheap these days. However, if you’re looking to record a drum kit for example, then ideally you’ll need at least 8 mic inputs on the interface, so you would need to look at the larger models on the market. 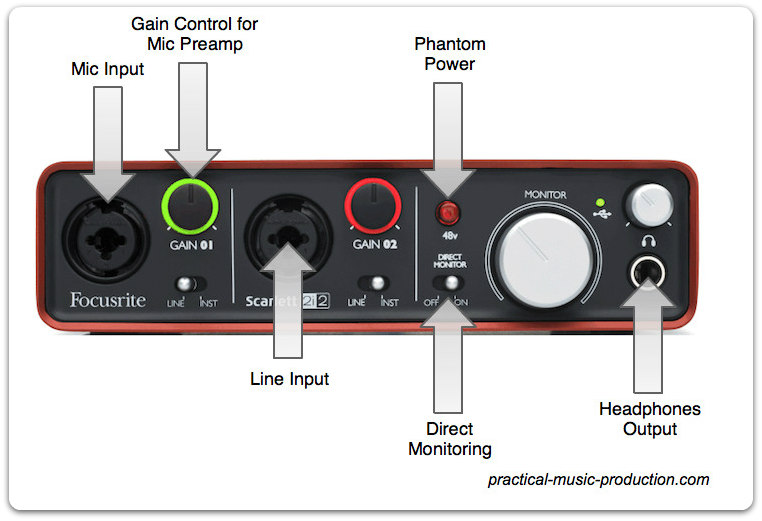 1/4″ jacks are used for connections to guitars, keyboards, studio monitors, mixing desks, and a whole host of other recording devices in the studio.

Most 2-input audio interfaces will have the jack connections in the same ports as the mic inputs. This means that you’ll only be able to record a maximum of two sources at a time. This could be:

One of the most common ways to use 1 mic input and i jack input is when recording electric guitar. You can plug your microphone in to one of the XLR ports, and then you can connect the direct signal from the guitar (via a DI box) into the other jack input.

Mixing together the mic’d up guitar amp and the direct guitar signal is a studio recording technique used all over the world. The amp can give you the power and drive, and the direct signal gives you more definition and note detail.

This is where you connect your studio monitors. You can play back the music you’ve recorded and created, especially important for mixing.

Smaller 2-input interfaces usually have TRS jack monitor outputs. These cables are balanced, so they won’t be at risk of any electrical interference that may be picked up from other devices in the studio. The last thing you want when you’re recording or mixing is interference!

Headphones are used for monitoring during recording. When you’re capturing a recording through a microphone, you can’t have anything playing through the studio monitors as the sound will spill into the microphone and ruin the take. So the musician or vocalist has to listen to the music through a pair of headphones instead.

For a condenser microphone to work, it needs a charge of +48V to be sent to it. Most modern interfaces will have a phantom power button for this purpose, and the power signal passes down the XLR cable and into the microphone.

It’s very rare these days to find an audio interface without phantom power built into it. But you should always check beforehand – your condenser microphones won’t work without it!

When you record a sound with a microphone, the electrical signal that’s generated is actually very weak. So before the signal is passed to other studio devices for further processing, it needs to be boosted. This is the job of the preamp.

Every microphone input you find on an audio interface will have it’s own dedicated mic preamp. The quality of the preamps are often what separates the good interfaces from the poor interfaces. It’s one of the reasons why the Focusrite Scarlett audio interface series is so highly rated and popular – Focusrite make very good mic preamps. 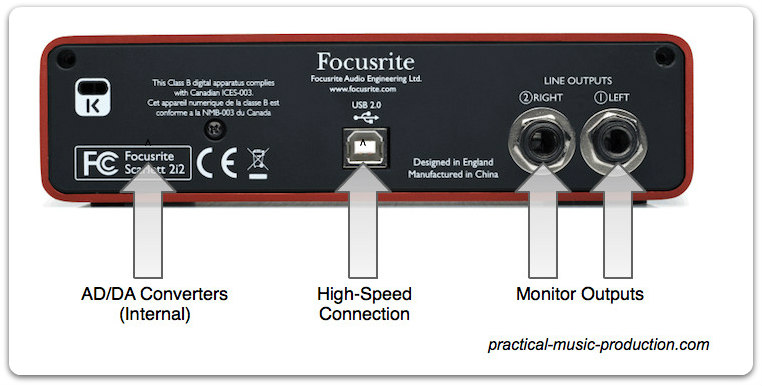 In the real world, we hear sounds as analog waveforms, but computers work in the digital domain. These two worlds can’t communicate with each other directly, so what can be done to help?

Check that the studio audio interface you’re interested in has good AD/DA converters. Just like the preamps, the AD/DA converters can have a big effect on the quality of the sound. Most of the big names, like Focusrite and PreSonus, will always use great-quality converters inside their interfaces.

When you’re recording, you need to hear that signal instantly inside your headphones so you can play your part with accurate timing. Direct monitoring lets you do this – it sends the inputted signal straight back to you, directly out of the headphones and monitors.

If you didn’t have this feature, the signal would have to pass through the interface, be processed by the studio computer, then come back out of the interface. This introduces latency – a small time delay between what you play and what you hear back. Thats why direct monitoring is also known as zero-latency monitoring.

This small delay of only a few milliseconds can cause issues with playing in time. This will then disrupt the quality of the recording and things will start to fall apart pretty quickly. So recording with zero-latency monitoring is very important in today’s home studio.

The amount of data needed to process audio signals is huge, so the interface needs a high-speed connection to the studio computer. Most interfaces will be either USB 2.0 or FireWire 400, although some top-end interfaces use FireWire 800 or Thunderbolt.

When you’re looking to pick up an interface, just check what connection type it uses. Also check that your computer also has the capability for the same connection type.

The Scarlett 2i2 (reviewed here) is the leading 2-input/2-output audio interface out there (although the PreSonus AudioBox USB 96 is another interface worth mentioning).

Here are some of the important features you’ll want to know about:

If you’re looking for a simple one-input audio interface, then the Scarlett Solo (reviewed here) is the best choice by far.

A selection of some of the key aspects are:

What Is An Audio Interface And What Does It Do? – Final Thoughts

All of the essential features of a studio audio interface that I’ve described above are vital if you’re going to gain the benefits for your home studio. Make sure any interface that you’re thinking about has these fundamentals built in – the quality of your music could depend on them.

Alongside your computer and a couple of microphones, your audio interface is one of the most important bits of kit you’ll invest in. Have a look around and take your time in choosing, although don’t be surprised if you end up going for one of the more popular interfaces from Focusrite or PreSonus – they’re popular because they’re very good!