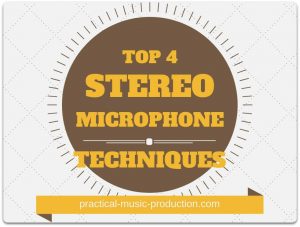 Using different stereo microphone techniques, you can record a sound source using two microphones at the same time, producing a stereo image of the sound. This stereo image is created due to the tiny amplitude and timing differences that each microphone will pick up, helping you to capture realistic recordings.

I often come across new starters who think that some sound sources are only recorded with one microphone pointing directly at the source. But using more than one mic can help add an extra dimension to your productions that you would otherwise miss out on if you only stuck to the traditional single mic approach.

There are potential problems with these stereo microphone techniques that need to be looked out for, but they’re easily overcome by following a few simple tips and guidelines.

Here you’ll find a straightforward guide to the 4 most common stereo microphone techniques you’ll see used in recording studios today. These techniques can also be used in your own home studio without any issues.

There are a few different aims behind the use of stereo recordings:

Below are some of the more common techniques you’ll find used in the recording studio, with an acoustic guitar as an example.

Too big a space can produce a “hole in the middle”.

This can be fixed by using a third omnidirectional mic in the middle of the other two mics – this is known as a Decca Tree mic technique, developed by recording engineers at Decca Records in the 1950s.

This technique is commonly used for recording orchestras or pianos, or recording drum kits in large live rooms. The Decca Tree is shown below. 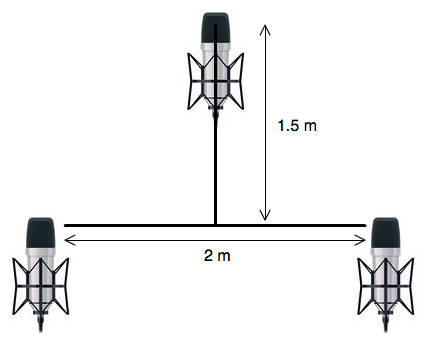 To create the stereo image, you need an M/S decoder, or you can create one yourself using certain settings on the mixing desk:

ORTF stands for ‘Office de Radiodiffusion Télévision Française’ (although you don’t need to remember that). Its first use was around 1960 at Radio France.

This technique is different to true stereo recording. The technique uses a model of a human head – a pair of microphones are placed inside the model’s ear canals, in the location where the eardrum would be found. You’ll often see this called ‘Dummy head’ recording.

The recording is then to be listened to on a pair of headphones. The idea behind the technique is that the headphones accurately play back what would have been heard at the recording stage by the dummy head – it’s as if you had actually been present at the moment of recording.

Binaural recording hasn’t really entered the mainstream when it comes to playback methods – stereo is by far the main player (5.1 nearly took off several years ago, but that has also fallen away with little mainstream success). One of the reasons is that to truly experience the effect the listener needs a very good pair of headphones – most music these days is listened to on loudspeakers or small in-ear headphones, so the advantages of using this technique in the studio wouldn’t really be heard in the real world.

TV uses several different systems to send more than one channel of audio.

These phase issues have a negative effect and cause the combined signal to sound ‘hollow‘ – certain frequencies will cancel each other out, and it can especially affect the lower frequencies.

One of the ways to rectify this is by shifting the audio waveforms inside your DAW so they move back in phase.

Roughly speaking, sound travels at a distance of a foot every millisecond. So for example, if your first microphone is up close to a guitar amp, but the second mic is 3 feet away, then shifting the waveform of the second mic backwards 3ms will move the audio waveforms back in phase. But be careful with this – you may have to zoom in closely to look at the waveform itself, to check that they’re perfectly in sync and in phase.

Another method to combat potential phase issues is known as the 3-to-1 rule (also seen as 3:1). This basically says that for every unit of distance between the first mic and the sound source, the second mic should be three times that distance from the first mic.

Let’s look at some examples:

It’s an important rule to live by when using any of the stereo microphone techniques, and it will stop most phase issues before they even begin.

As you’ve seen, there are many different stereo microphone techniques that you can use to record your vocals and instruments for use in your mixes and productions. I recommend that you try some out and listen to the different images you can create. Recording an instrument in stereo will often lead to more realistic and natural results compared to sticking to the usual single mic techniques.

Don’t be afraid to experiment – try recording the same sound with all of these techniques and listen carefully to the differences. You’ll be amazed at the breadth of results you’ll get.