How to Master the Art of Recording Vocals 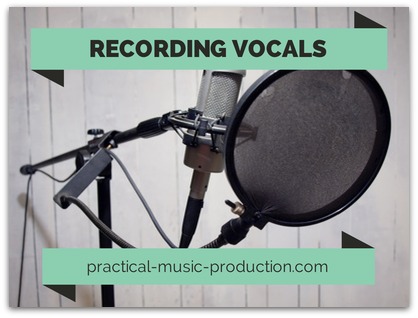 Capturing great results when recording vocals is the key first step to producing voice-led tracks in your home studio. When vocals are used, they often become the focal point of the song, so it’s vital that they’re recorded, mixed, and produced to a high standard.

The human voice is one of the most expressive and dynamic instruments around, and recording it can be made simple just by paying attention to a few key areas.

The environment and your choice of microphone can both have a huge effect on the qualities of the recording. Special attention must be paid to certain areas of the singing voice, such as sibilance, plosives, and the proximity effect. And most importantly, the singer must feel comfortable in the studio for you to capture a performance worth recording.

Large-diaphragm condenser mics with a cardioid pickup pattern are your best option for recording vocals, and give the most natural-sounding results. Some of the reasons are:

Dynamic mics do have their uses, too. Recording vocals in a heavier rock style isn’t always suited to a condenser mic – dynamics are better for the louder volumes, and can help give the vocals a more rugged quality.

So if you’re looking to get a microphone or two for your own studio and to build up your arsenal, you can’t go wrong with some of the following:

Like any instrument, the sound and tone of the vocal can be affected by the studio’s acoustics and environment. A commercial studio will have it’s own dedicated vocal booth, an acoustically dead compartment designed to capture vocals.

It’s very unlikely you’ll have a booth of your own in your home studio – they can be expensive and can also take up a lot of room. But there are other alternatives available, like these smaller devices:

If you’re unable to get hold of any of these, you can still create an environment that reduces any acoustic reflections as much as possible. Here are a few key tips to follow to make the most out of your room:

The human voice has a few characteristics that you need to look out for when you’re recording vocals. These include:

Sibilance is the sound you hear when the letters ‘s’ and ‘t’ are spoken or sung. These sounds contain a lot of high frequency content – the presence peak of a condenser mic can sometimes highlight these letters a little too much, causing the ‘s’ and ‘t’ to sound unpleasant, perhaps even causing distortion.

The effect can be reduced and even eliminated by a de-esser, or a finely-tuned equalizer.

Popping is the effect of plosives being picked up by the microphone. Small bursts of air leave the mouth when certain letters are used – b, d, g, k, p, and t are the biggest culprits. The best defense comes from using a pop filter, which stops these bursts of air reaching the microphone.

Another option is to use an omnidirectional pickup pattern – they don’t suffer from the issue as much as directional mics (like the cardioid pattern).

The proximity effect is another issue related to directional polar patterns. When a sound source (a vocal or any instrument) gets closer to the microphone, the lower frequencies are boosted and rise in volume. It usually starts when the source gets to within 6 inches of the mic.

Most microphones will also have a high-pass filter switch, which is another way to minimize the proximity effect when recording vocals.

When you record vocals in the modern studio, you have a great advantage of being able to capture many different takes without having to worry about using up too much tape or storage room. Modern computers, hard drives, and DAW programs all help to give us this option.

Capturing multiple takes of the same vocal lines, choosing the best versions, and then piecing them together inside your DAW is known as comping – short for composite. It’s common to see this comping method used in a lot of modern music production.

Once the best vocal take has been pieced together, you should record it to a new track inside your DAW – it’ll make it easier to apply any processing and effects during mixing.

Monitoring for the Singer

It’s important for the vocalist to be comfortable and happy in the studio – lots of things can affect a performance, like the temperature of the room or the presence of other people in the studio. It’s a good idea to spend the time making things as easy as possible for them.

It’s also worth taking your time when you’re setting up the monitor mix for the singer – what the singer hears through their headphones can have a big impact on the quality of the recording.

There’s more information about this over on the headphone mix page, including how to set the mix up, the best type of headphones to use when you record vocals, and some tips on what to put into the mix for it be effective.

As I’m sure you know, the human voice has a naturally wide dynamic range. One second a voice can be calm and quiet, the next it can be a full-on scream. To get a sense of the dynamic range for the song you’re working on, run through a take as you set the recording level.

If the vocal is generally quite even throughout, then compression at the recording stage isn’t needed. But if the difference between the quietest and loudest part is quite wide, then a little compression can help catch these louder parts before they overload and distort.

The vocal will no doubt be compressed during mixing, so you only need to use a small amount during recording, if at all. Here are some tips:

I wouldn’t use any other processors or effects when you record vocals – you want to capture as clean a signal as possible, leaving everything else for the mixing stage.

Different singers can suit different microphones, so it’s great to have a small selection to get your studio up and running for vocal recording. To begin with, here are a few essentials:

It can easily take up a lot of your studio time when you record vocals. It’s a tricky area to get right, and can be affected by so many different factors. But by following these simple steps and guidelines, and by showing the singer some patience and understanding, you can easily capture great vocal recordings in your studio.