Recording Keyboards in Your Home Studio – The Complete Guide 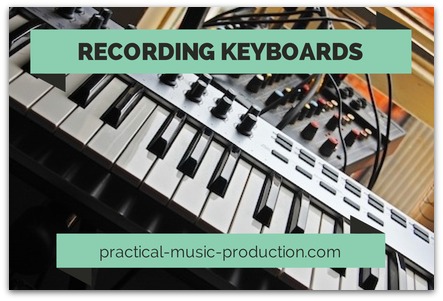 You’ll probably be recording keyboards a lot in your home studio – keyboard instruments are used everywhere these days to create music. Generating sound with hardware keyboards and synthesizers is still very popular, as it’s widely felt that the sound is fuller and more powerful than the sound created by software plugins and instruments.

This widespread love of keyboards means that there will always be a need to capture their sound in the studio. How you approach it will depend on the keyboarditself and the setup you have in your home studio, as well as the sound you want to record. The most popular ways are:

Connecting your keyboard directly and recording the output is probably the easiest way of recording keyboards. It can be done in a few different ways:

If the keyboard sound is actually coming from a software plugin inside your DAW, then you’ll be looking at recording it through MIDI (which can also be recorded through USB with today’s MIDI keyboard controllers). The MIDI signal will control what notes the software plugin plays, along with any other MIDI controls you want to use – but the actual sound will be generated inside the computer.

My own favorite way of recording keyboards (and probably the most common way as well) is through the instrument’s line-out connections, usually 1/4″ jacks. You can plug them straight into your audio interface (or mixing board if you use one), and record the sound directly into your DAW. Recording the dry signal like this also means you can get creative with your plugins you have in your studio computer.

One extra thing to think about is the output level of the keyboard. Some keyboards output at quite a low level – what’s known as consumer level. This can be an issue when it comes to setting a good recording level without introducing too much noise into the recording. One way around this is to use a DI box, which will boost the signal up to line-level, as required by audio interfaces and mixing boards.

Keyboard amps are different to guitar amps. They need to produce a wider frequency rangedue to the low and high notes that a keyboard can reach – a keyboard amp almost has to be like a cross between a guitar amp and a bass amp. 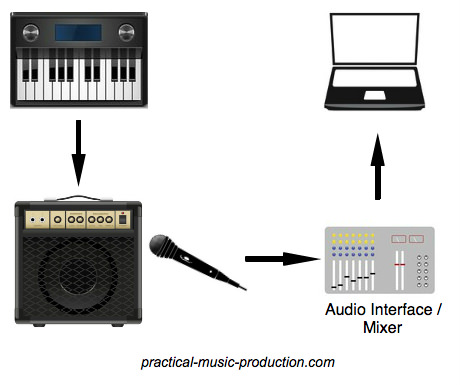 The amp’s design also has to keep distortion to a minimum, as keyboard sounds are usually recorded as cleanly as possible. If you want to get a dirtier, distorted sound then you can always use a guitar pedal in between the amp and the keyboard, or use a guitar emulation plugin during or after recording.

The best way to introduce natural distortion to a keyboard recording sound would be through a tube amplifier. Like tube guitar amps, when the volume is turned up loudly the tube circuitry overloads, creating an overdriven sound. The classic Leslie speaker, made famous during the late 1960s and through the 1970s alongside the Hammond B-3 organ, is the most famous of these.

Keyboards will also have their own small on-board speakers that let you hear what you’re playing. I sometimes get asked whether it’s worth recording these speakers with a microphoneor two, but they’re often so small and tinny that the results are never very good. I’d steer clear of going down this path.

If you choose to go through an amp when recording keyboards, then both dynamic and condenser mics can be used.

You can think about it in a similar way to how you would record a guitar. If the keyboard sound is quite aggressive or you’re using some kind of overdrive/distortion effect, then a dynamic mic will also help in capturing this kind of rugged sound. A Shure SM57 or SM58 would do the trick nicely.

But it’s more likely that your keyboard sound will be bright and crisp with plenty of high-frequency content, outputted at a fairly normal volume. Condenser mics are better suited here, so whatever you have in your studio, try it out.

As you can see, there are a few different ways of recording keyboards. It’s probably unlikely that you’ll have a dedicated keyboard amp in your own studio, and in fact this will be the case in most home studios. It’s why recording directly is by far the most common and popular wayof capturing your keyboard sound – you can then add any kind of processing or effects to it during mixing.

If you want to find out more about music production and home recording, then sign up for the weekly newsletter in the form below. You’ll also get a home studio guide as well. And it’s all free!