The Recording Engineer and Other Roles Found in the Studio 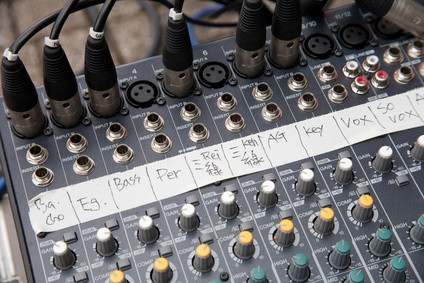 The recording engineer is one of many different roles found in the studio when it comes to building a team to create and produce music.

You’ll often have to take on many of these jobs at different times when you’re producing your own music. I often find that I’ll be getting ready to record my own guitar part for a track I’ve written, but then I’ll need to think like an engineer to set up the microphones in the right positions.

And always in the back of my mind is the mindset of the producer, thinking about the guitar part’s purpose in the overall picture of the song.

As a producer, before you can work your magic in the studio, the music actually needs to be written. The role of the artist covers everything from the writer, to the singer, to the musicians, and if you’re producing your own music in your own home recording studio it’s likely you’ll be all three of these at some point.

You’ll need to decide whether you want to play all the musical parts yourself, or if it’s worth bringing in outside musicians to play the parts you’ve written, whether they’re friends or professional studio musicians. You can also think about whether you want to work in collaboration with these other musicians during the writing stage.

Each approach has its good points and bad points. And each approach can be dependent on what your goals are with your music. Working with other musicians or writers can be both exciting and intimidating. If you like to control everything yourself (I know I do sometimes), then it’s wise to let yourself be the sole creative force in the studio. But input from someone outside of your usual circle can sometimes inspire new directions or help with creative blockages.

The recording engineer’s job is to record and capture the music as it’s being played by the musicians. A good engineer will be responsible for the recording devices in the studio, whether that’s analog tape or a DAW computer. Basic computer knowledge is essential as well.

The engineer will be responsible for the placement of microphones and setting up the conditions for the musicians to be able to play comfortably. They’ll set up recording levels, pre-amp settings, compressors, and EQs amongst other technical things, all towards the goal of recording the best possible take they can get.

There is also room for creativity as well in this role. A skilled engineer can listen to what the producer, artist, or musician wants a recording to sound like, and can help achieve that sound by choosing a certain microphone setup or a specific compressor setting.

Commercial recording studios will often have an assistant to the main sound engineer. The assistant will usually take care of the more mundane jobs during the recording session, and will also be learning things from the main engineer so that, one day, they too can become a recording engineer in charge of their own session.

The main job of a music producer is to work with the artist and musicians in the studio, and to help them in the creative process of recording their music. They’ll often help with arrangements of tracks and instrumentation of songs as well.

An artist can often get emotionally attached to certain aspects of their songs, which can result in decisions being made that aren’t always in the best interests of the music, either artistically or commercially. A producer can help to give an external opinion on things which can help the artist. It’s one of the reasons why the relationship between the artist and producer is the most important in the recording studio. Trust is very important.

In certain situations, the roles of producer and engineer can become blurred, as in many ways each role has a part to play with the other. Some project studios will often have resident engineers who can also act as the producer on recording projects.

When recording and producing in our own home studios, we’ll often need to perform many of these roles at different times. Each role, from the recording engineer to the musician and producer, contains its own area of knowledge and expertise. But that’s one of the things I love about creating and producing at home – there’s always a skill to develop or something new to learn.