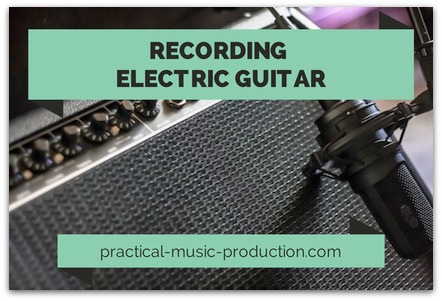 A lot of music these days features guitars, so recording electric guitar is a key part of producing music in your own home studio. The electric guitar is one of the most popular instruments around, and getting good-quality recordings of them is fairly straightforward once you know how.

Electric guitars can be used in so many different ways – as a simple vocal accompaniment, as the main lead instrument in a band, or as a way to create textured layers for a production – and this is just a small selection.

I’ll be looking at the different areas to think about and what to do to get the best recordings you can.

In basic terms, guitar amps are just speakers that are mounted into cabinets, either fully sealed or with an open back. Amps tend to have pretty poor high-frequency response, rolling off quite quickly around the 4-5 kHz mark. Open-back amps usually have a fatter sound to them with more present bass.

Guitarists tend to favor vacuum tube (valve) amps above other types. But nowadays they tend to be expensive, and the cheaper amp models are usually solid-state (transistor) designs.

Because of the limited frequency response of guitar amps, dynamic microphones are usually used when recording electric guitar. The high volume levels of amps are also better suited to dynamics.

The best polar pattern to use would be cardioid (or super/hypercardioid), with omnidirectional being the next best choice. Generally speaking, if you’re going to record guitar through your amp with lots of other instruments in the same room, use a cardioid to minimize the spill.

If you only pick one mic to use, you can’t go wrong with a Shure SM57 or an SM58 – classic dynamic microphones that all home studios should have.

For best results, recording the amp in isolation is the preferred option as you don’t have to worry about potential spill from other sources.

A common mic technique for recording electric guitar is to use a dynamic mic up close to the amp’s grill with a condenser mic at a distance of around a foot. It gives you a nice combination of tone across two tracks, which you can mix together in your DAW.

But you must always remember to use the 3-to-1 rule when you’re recording with more than one microphone.

Any decent condenser microphone will do the job. I’ve had great success with the Audio-Technica AT2020 over the years.

The closer a mic is, the brighter and more intimate the recording will be. This brightness will also help the recording to cut through a mix better when compared to placing it further back, where the sound would be warmer but less sharp.

You can also change the tone by changing the direction of the mic. The sound will be brighter if the mic points towards the center of the amp’s speaker, becoming less bright the more you point it towards the edge of the speaker’s cone. 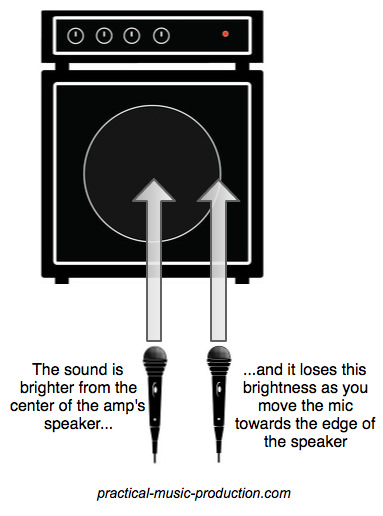 A lot of small-to-medium sized guitar amps you find in home studios will be open-backed. You can combine two recording mics by placing one in front of the speaker and one behind, later combining them in your DAW during mixing.

But one thing you must remember to do is to invert the phase of the rear microphonebefore recording, so it’s in-phase with the front microphone. This is essential.

Recording guitar directly is also an option. A DI box lets you record the clean direct signal alongside the microphones, together during the same take. You can find out more about how to do that over on the DI box page, as well as how to re-amp your recordings.

With the spread of amp simulator software as well, like Guitar Rig and AmpliTube, recording the DI signal by itself lets you use these plugins to completely design your guitar tone after you’ve recorded.

Many guitarists don’t even bother recording real amps anymore. You can plug your guitar directly into your audio interface to get quick clean recordings for using with your guitar software.

Recording electric guitar is an essential skill for the home studio, and easy to get right once you’ve learned the basics. Whether recording an amp with a microphone or two, or plugging your guitar in directly and then using a plugin for your sound, your music productions will improve when you’re able to capture great electric guitar recordings.