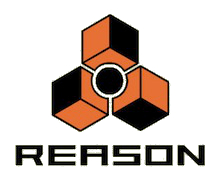 The Swedish company Propellerhead released the first version of Reason music software back in 2000, and since then it has gone from strength to strength. It’s mainly aimed towards the home studio audience and towards producers interested in creating electronic music.

Propellerhead released a program in 2009 called Record which is now included with the Reason package. It gives Reason full DAW capabilities like recording, editing, and mixing. But Reason’s real power and potential lies elsewhere in the program.

I’ve only used Reason on a few occasions in the past, and apart from the initial steep learning curve, I found that you could get interesting and creative results quite quickly and easily.

One of the central features of Reason music software is the studio rack. Producers can organize the rack by inserting devices into it in whatever order they want. You’re then able to connect the devices however you like, and this flexibility can have a dramatic effect on what sounds you’re able to come up with.

Exactly how this works is through the use of something called the Toggle Rack which allows you to turn the rack around to see behind all the devices. This gives you access to all of the inputs and outputs, and you can connect virtual cables to and from the inputs and outputs to route the audio wherever you want.

This concept of working can be a bit strange at first – it took me quite a bit of time to get used to it when I first used Reason.

Of course, just like in the real world, some routing combinations won’t work or will give you useless results, all of which is part of the learning process. But these situations can also lead to happy accidents, times where you’re not quite sure what you’re doing but you still end up with interesting sounds.

ReWire is a fantastic piece of software that allows you to use Reason ‘inside’ other DAW programs. This flexibility is another example of why Reason music production is so popular.

Reason can effectively be used as a plugin inside programs such as Pro Tools, Ableton Live, Logic Pro, and Cubase. But it’s not like a normal plugin. Reason music software can still be used to its full potential – you’re basically able to use two DAWs at the same time and have them sync perfectly. Very powerful and exciting for a producer.

Some of the primary devices found in Propellerhead Reason at the moment are:

There are lots of other devices and effects as well, and combining them in different ways can lead to innovative ways to produce and create electronic music.

The way that Reason is structured means that it has become one of the most popular and successful DAWs out there for electronic music production. But there can be quite a steep learning curve to begin with because of the difference in how it works compared to other production programs.

Some producers find that shifting to Ableton Live can feel like an upgrade from Reason, especially as both programs are directed towards the same style of producer. Whilst it’s easier to get quick results with Reason music software (the link takes you to the official site), Ableton Live does offer a more flexible and powerful DAW program, allowing you to delve deeper into all of the possibilities of production.