Home » Gear » Why a Noise Gate is Used in Your Studio

Why a Noise Gate is Used in Your Studio 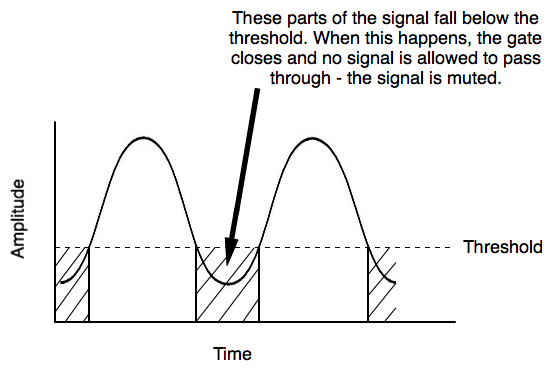 A noise gate is a bit like an upside-down limiter. Instead of limiting signals that rise above a specified threshold, the gate mutes a signal as it falls below the threshold.

The main purpose for using one of these devices is to eliminate background sounds or instrument leakages from other sources, when the instrument or vocal you are recording is not playing or singing.

For example, if I was recording a guitar, there will probably be certain spaces in the song when it’s not actually being played (such as during the first verse). But the microphone recording the guitar would still pick up sound from the amp or from other instruments.

By inserting a gate into the signal path I could eliminate most, if not all, of this extra ‘noise’ which will help to keep the track sounding clearer and more professional.

A noise gate, sometimes known as an audio gate, has similar basic controls to a compressor or limiter – including threshold, attack, and release. They also work in similar ways. A gate often contains a setting called ‘hold’ as well. Let’s look at what these controls are. Gates are especially useful when recording and mixing drum kits. During recording, each microphone will pick up a lot of spill from the whole drum kit.

An example would be with the tom drums. They may only be played a few times during a song, but the microphones dedicated to recording each tom will pick up the sound of the rest of the kit for the duration of the song.

Using a gate on each tom’s microphone signal, you can eliminate this spill and only have the gate open when the toms are played. This helps to clean up the mix, and gives more definition to the sound of the toms coming through the mix.

You could also place a gate on the snare drum and kick drum, for the same reasons.

Gates aren’t used that often any more when mixing and producing tracks inside DAWs. Programs such as Pro Tools have software plugins that can remove unwanted parts of recordings that fall below a threshold level that you set. The tool can remove these unwanted sections from the selected audio file. The function in Pro Tools is called Strip Silence, and similar tools or techniques can be found in other DAWs as well.

This feature also helps to save processing power inside your computer, as you don’t have to add gate plugins to each channel that needs one (plugins can use up a lot of processing power). The saved power can then be used for more essential or creative plugins.

If you’re working with a DAW, I definitely recommend using the relevant plugin that removes these blocks of low-level noise from your audio recordings. It’s a great tool to use to help your mixes and productions sound cleaner.

This device is very similar to the gate. The only major difference is that instead of muting the signal once it falls below the threshold, the expander still lets some signal through but at a lower level, resulting in a signal of lower volume. The level of signal that’s reduced is controlled by the ratio setting on the audio expansion unit. The noise gate and the expander are rarely used these days in the studio, but they can be useful in certain situations if and when the need arises. If you have one of these devices or plugins, play around with it and listen to what it does first-hand. You might find a cool new use for one of them.

How Do Synthesizers Work? Find Out All You Need To Know Here
Why and How You Use Studio Headphones
How to Use Music Recording Equipment to Create Your Productions
What Music Studio Equipment do You Find in the Professional Studio?