What is a Music Sequencer? 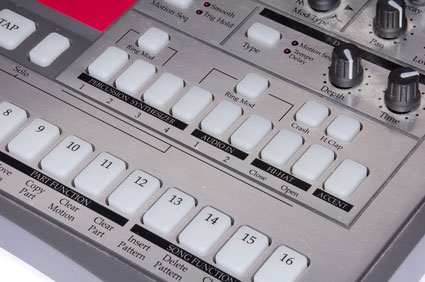 A music sequencer is one of the most important pieces of equipment we use in our home studios. It’s where we record, edit, and process a lot of the electronic drum, bass, and synth parts created for our productions.

There are lots of different types of these devices available, ranging from MIDI hardware devices through to DAW software programs. Most of them are software-based, and are included as part of DAW software packages.

You’ll find the same basic functions across the different types of music sequencer as well – recording, editing, and the playback of MIDI data are a few, and you’ll also see that they’re able to control automation for software instruments and plug-in units.

Some early digital hardware sequencers were known as ‘step sequencers‘, and could play simple patterns of notes or rhythms.

They included early drum machines (drum sequencers) and bass machines, such as the famous Roland MC-808 and MC-303 machines. Modern instruments such as the Akai MPC series also use sequencing features.

Hardware sequencers are easy to use and easy to move around, and can be used both in the studio and for live performances, in a similar way to a control surface. They usually contain the same basic functions as software-based programs, including play and record, along with basic editing functions.

But you might find that the editing functions won’t be as broad as with a software sequencer, which often contain more features and are usually easier to use.

Two of the most popular hardware models you’ll find today are:

These devices also contain other functions, like a drum machine, a sampler, and effects controls. I’m a big fan of these types of sequencer – they’re fantastic when used live and can help bring electronic music performances to life.

These are the most common form of music sequencer found nowadays – they can make use of the processing power of a modern computer. They can give us more control over lots of different settings, levels and parameters, usually more than on hardware devices.

These days, you won’t find many software programs purely dedicated to sequencing. You’ll find the sequencing part built into all of the popular DAW programs, such as Cubase, Logic, Ableton Live, and Pro Tools.

Like most things related to home recording and music production in your studio, the choice comes down to how you like to work and be creative. Ask yourself what your main goal is in production – do you want to be a complete studio-head? Or do you also want to get out there and perform live?

Some producers I know like to be hands on and feel like they’re physically connected to the sounds they’re working with, and prefer to be controlling buttons and knobs directly with their hands (as found with hardware). Others like the larger choice of options and controls they get with software programs.

I think both have their place in the right environment, and can be used for their own particular strengths. But if possible, give both approaches a go and see what you prefer.

MIDI plays an important role in the world of the music sequencer, which is why you commonly see them called ‘MIDI sequencers’. The range of MIDI controls you get will vary between sequencing devices and programs, but you will find the same basic functions across all of them:

Whatever DAW program you decide to use for your recording and production, spend some time and get to know the music sequencer section well. They can play a big part in your joy and success as a music producer.