How to Use Your Music Production Studio

Spending lots of time in your music production studio is one of the surest ways to improve and enhance your skills as a producer – I’ve experienced this myself first-hand. Plenty of practice and dedication is needed if you want to advance and progress.

But before you can get to work in your studio, you need to connect and set it up correctly so that everything works.

I’ll also talk briefly about the general process involved in recording and creating your own music.

There are some essential items of gear that you’ll need before you can start recording and producing your own music. I’ve provided lots of detailed information about this over in the recording equipment section, which you’ll find through the ‘Equipment’ link in the green bar above.

Once you’ve collected together the equipment you need for your recording studio setup, you’ll need to connect it all together. I’ve always found diagrams to be a great way to visualize things like this. Below is an example of a very simple setup for producing music. 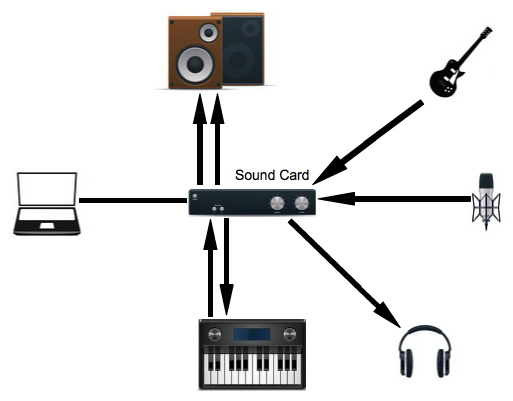 There are several steps involved in the recording and creation of your own music in your own home studio. Generally, these are:

In commercial studios these steps are generally followed in this order when artists record with engineers and producers to create records. But in project and home studios the lines can become a little blurry between the different stages. The writing stage can also merge into these different stages as well.

It’s easy to see why this is. A recent track I worked on started by recording a friend’s vocals and acoustic guitar and then overdubbing a couple of other guitar parts on top. We then recorded a bass part. These were then mixed together where we applied some compression, EQ, and reverb to improve the sound of the mix.

After listening to what we had, we chose to introduce a drum part, using the software drum program Battery. A new keyboard part was then recorded via MIDI as well.

So as you can see, the different areas of recording, overdubbing, mixing, and writing have all been used at the point when they’ve been needed. Your own next musical creation might be written and produced in a completely different way. It really depends on what you think is needed in the moment. This kind of flexibility isn’t seen as much in commercial studio settings.

Other Media in the Studio

The time may come when you want to collaborate with other artists and create and produce music for other media forms, such as film or video games.

If this is the case, it’s really useful to have a second computer monitor in your studio, where you can display the visual media file. This allows you to keep your main screen dedicated to your music software programs.

I once did some work in the gaming industry and working with two screens led to a much more fluid working experience, as I was able to keep the visual file on one screen whilst using the music software on the other screen.

There are many different ways you can use your music production studio to create and produce your own music, and there really are no limits when it comes to deciding how to use it.