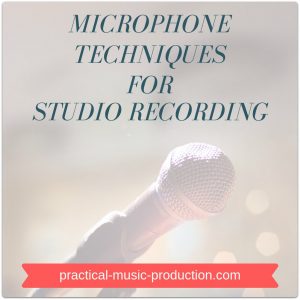 Applying a variety of microphone techniques for studio recording can help you to expand the range of sounds you can achieve from your recordings. Each microphone setup has its own features leading to its own characteristics, and this variation can lead to interesting and creative dimensions in your mixes and productions.

You may think that vocals and instruments are only recorded with one microphone pointing directly at the source. But there are many different setups you can use to record a sound – ranging from one mic, to a combination of two mics (known as stereo recording), or sometimes even three mics for some recordings.

This is the most common of the various microphone techniques that people will know about. A microphone is placed within three feet of the sound source, which will achieve a close, tight recording. Very little sound from the room’s environment will be picked up by the mic – most of the sound will be direct from the voice or instrument. 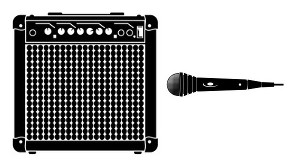 Recording all of your vocals and instruments closely like this gives you a lot more freedom later on when it comes to processing, adding effects, and mixing, as your recordings will be very dry and direct. I admit that a large majority of my own recordings are usually done this way.

The technique also helps to separate individual sounds if you’re recording more than one source at a time, as the amount of leakage from each audio source is minimized.

Of course, you can also minimize these leakage effects by using better mic placement and placing the mics closer to the sound source. You can also make better use of the recording room, or make use of sound absorbers and barriers.

Leakage into different microphones will make it harder to mix the tracks together later on. It’s definitely something you want to avoid in your own home studio if possible.

The 3-to-1 rule outlines what you should do when you record different voices or instruments with the close mic technique. The rule basically says if a microphone is one unit of distance away from the source, another microphone should be at least three times that distance from the original microphone. 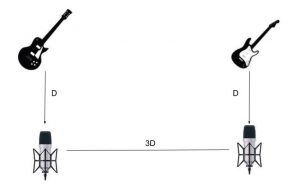 Another opinion is that the 5-to-1 rule gives better results when you want to minimise leakage further. The same rules apply as the 3-to-1 rule. So, if you’re recording a vocalist from 6 inches away, the next microphone should be at least 30 inches away.

These rules will only really work when you use cardioid (or supercardioid or hypercardioid) pickup patterns on your microphones.

It’s all a balancing act. Cardioids will minimise leakage, but any leakage that is recorded will sound off-colour. But if you used omnidirectional microphones, then the leakage would be increased but the sound would be faithful to the sound source.

Placing your microphone further away from the source (three feet or more) results in more ambient sound from the room being picked up. The sound of this natural reverb can be excellent if you have a great-sounding room, or if you’re recording in an unusual place such as a tiled bathroom or at the bottom of a concrete stairwell (which can lead to interesting creative results as well).

Recording in the studio with this kind of mic set-up is usually used for large choirs or orchestras. The acoustics of the studio will also need to be professionally treated so the ambience of the room doesn’t affect the quality of the recordings. The positions of the mics will depend on the size of the room and the volume of the voices or instruments.

But this probably won’t be an option in your own home studio as you’re probably recording in quite a tight space. When you have a recording with this natural reverb of the room added, it can be it difficult to ‘match’ the sound with your other sources at the mixing stage as the sounds of the different environments and rooms won’t fit together.

I think the better option is to close mic a source and then to add the amount of reverb you want later on – it can make it much easier to achieve a coherent mix and production, as you can then use the same or similar reverbs across all your tracks.

When recording large groups of vocalists or instruments, like with a choir or an orchestra, an ‘accent microphone’ will often be used.

If a solo vocalist or solo instrumentalist is in the group but needs to be better defined in the final mix, then an accent microphone can be placed nearer this sound source. But you need to be careful with the placement of this mic in relation to the other mics in the room.

You also need to watch out for phase issues between the different mics, so their positioning is extra important.

An ‘ambient microphone’ is used when you want to record more of the room’s acoustics compared to the direct sounds from the voices or instruments. You’ll see these used a lot in live recordings. Ambient mics will only be used in the studio if the room is fairly large and has an acoustic sound worth recording.

Another option is to record a source with two microphones. You can use two mics in a few different ways:

An example would be when you use a dynamic mic and a condenser mic together, with the two recordings being mixed later on to produce the desired sound.

You’ll often see this when guitar amps are recorded. When you mix the song, you can change the balance of the two mics at different points of the song. The verses may have more of the dynamic microphone sound, whereas the choruses emphasise more of the condenser microphone. This will change the sound and tone of the guitar at different points in the song, creating interest and a dynamic movement to the overall guitar sound.

I’ve looked at this approach to recording on the stereo microphone techniques page, along with the issue of phase that can often spoil the quality of these stereo recordings.

There are a few different stereo mic techniques you can use in your home studio:

This method uses 2 cardioid microphones, at an angle of 90-135 degrees to each other. The recording will have a narrow stereo spread but with a strong centre image. There will be no phase issues and the recording will be mono-compatible.

This method uses 2 omnidirectional microphones of the same make and model. They will be 3-10 feet apart, and the 3-to-1/5-to-1 rule must be used – you can get phase issues if you’re not careful.

The omni pickup patterns capture more of the room’s sound, so you’ll need a good-sounding room to use this technique. You’ll get a more spacious sound compared to the XY technique.

If the space in the middle of the two mics is too big, a third omni mic can be placed in the middle. This is called a Decca Tree, and is often used in large rooms when recording choirs or orchestras.

The three signals are then combined. Increasing the level of the figure-of-8 mic in the mix will increase the overall stereo picture of the recorded sound.

There’s actually a device called an ‘M/S matrix’ you can use, which takes care of a lot of the technical side of the M/S technique’s method for recording.

It’s easy to capture solid recordings of any vocals or instruments you want to use in your music productions, just by using these simple microphone techniques for studio recording. Choosing to use one mic, two mics, or maybe even three or more mics will depend on what you’re recording and what kind of sound you’re after – it’s often a creative decision, where you’ll have to decide what best suits your song and your production.