Why You Should Use a Mic Stand to Position Your Microphone 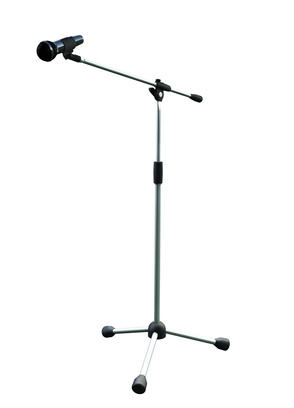 A mic stand will hold and position your recording microphone in your home studio so you can record tracks for your songs and productions. Without a stand your microphone would pick up and record all sorts of knocks, bumps, and vibrations that would ruin a take, causing the recording to be unusable.

Microphone stands are usually one of the items that end up towards the bottom of the list of equipment needed for a home studio. Don’t fall into this trap. I definitely recommend getting one or two stands to help avoid the problems that you would otherwise face.

In fact, I think it’s a great idea to purchase two stands when you buy your first two microphones. They’re very important for the quality of your recordings.

The straight microphone stand isn’t very flexible, so your best choice is to have one with a boom arm attached. This type of stand is also known as a boom stand.

The base will usually have a tripod attached, giving it stability. The tripod also has rubber feetwhich helps to reduce vibrations coming through the floor, as these will be picked up by the microphone and recorded (using a hi-pass filter can also help to reduce these low-frequency vibrations).

The boom arm is attached to the straight stand and it gives you a much greater range of movement. A mic clip is then fixed to the top of the boom arm, and the microphone itself slides into the clip. The microphone can then be positioned at lots of different heights and angles because of the flexibility that the whole device can provide.

The design of the stand-and-boom-arm means that a microphone can easily be put into position to record an instrument or vocal, and it also means that no part of the device will come into contact or get in the way of an instrument that you’re recording.

Some microphone models (especially condenser mics when used to record vocals) are placed in shock mounts instead of mic clips. The shock mount helps to reduce low-frequency thumps and vibrations from the floor, giving you a cleaner recording of your audio signal. 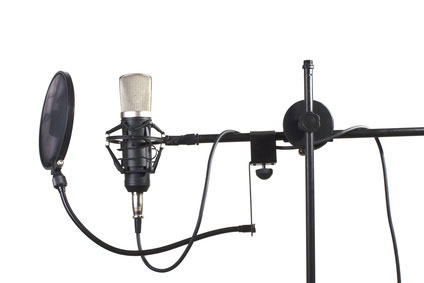 A pop filter (also known as a pop shield) is attached to the boom arm on the stand and is used when recording vocals. It’s placed between the microphone and the vocalist, and the filter helps to protect the mic from ‘popping‘ sounds that the human voice can produce on letters such as ‘p’ and ‘b’. By reducing the effect of these sounds the recorded vocal take will be cleaner and smoother.

If you’re going to be recording vocals for any of your projects, you really can’t do without a pop filter. My advice is to pick one up when you can.

If you want to get good quality recordings from your microphone, then a good mic stand is an essential piece of gear for your home studio. I recommend getting at least one, with a boom arm, so you can easily move it into position for each vocal and instrument you record. Pick up a pop filter as well.