Home » Studio Computers » What is a Digital Audio Workstation? 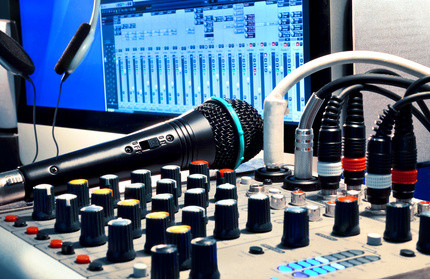 It’s a question that’s commonly asked. Simply put, the digital audio workstation (DAW for short) will be at the center of your home recording studio, and it’s where you’ll record, edit, and mixyour music productions ready to be heard by the wider world. When compared to analog recording and production, a DAW can record and process audio and MIDI with relative ease and speed. The creative options easily available to you are also much wider.

The advances of digital technology and the growth in computing power has meant that the best DAW software programs have become available to anyone who wants to use one at very reasonable prices. I think this is another reason why home studios have become so powerful and versatile over recent years.

There are a few different types of digital audio workstation systems out there. Two of the main ones are:

The second option is by far the most attractive for working on your own productions in your home studio – mainly due to the flexibility and the potential growth of the software (like adding extra tracks or extra plugins). I think the right DAW package can really expand your creative potential and help you to become a more productive and efficient producer.

Computers that are specifically built for the studio differ to normal consumer-level machines. They’re optimized for the highly intensive workloads that occur when working with audio, and they’ll generally be quicker, quieter, and more stable.

There are quite a lot of different digital audio workstation programs available nowadays, some of which are more commonly used for certain applications and features. But most of them include the same basic aspects of integrating audio, video, and MIDI:

A DAW program that only uses the processor inside the host computer is known as a ‘Native DAW‘. A non-native DAW program uses processing power from other sources, usually from DSP cards and devices.

Two examples are the Pro Tools HD and HDX systems, where extra DSP cards are used to process plugin effects. This helps to lighten the load on the computer’s main processor (it’s worth noting you can now get a native Pro Tools HD system, although it won’t have as much power as a DSP-based system).

There are a few choices these days when it comes to choosing a DAW program to use, and that choice largely comes down to what your own needs and preferences are. If you haven’t used a music production PC or Mac before and would like to try out a program before spending a lot of money, there are a few on offer that are relatively cheap, and some others that offer free demos.

It also depends on your platform, as some programs only come in Windows PC versions, and others are exclusively built for Apple Mac.

If you’d like to try out a budget DAW program before fully committing to one of them, then I’d first recommend one of these programs:

If you’re looking to try out a free DAW, the only one I really recommend is MuTools MuLab (PC and Mac).

If you’d prefer to dive right in and get started with the pro-level stuff, then I definitely recommend getting one of the higher-end programs that will provide you with all the features you need. Each digital audio workstation package can be used in much the same way, but they all have their own particular strengths that can best suit your production needs.

If you’re looking to record and work with real instruments:

If you’re looking to write and produce electronic music:

If you’re looking to try a full DAW with lots of features, but you’re on a tighter budget to begin with:

Choosing a DAW for your home studio is an important decision to make, as it will be the centerpiece of your whole studio setup. But don’t get stuck when trying to make a choice –  it mainly comes down to your own preferences and what you find easier to navigate and use.

Many programs come with free 30-day trials, and I’d urge you to try some of these out if you’re not sure which program you’d like to use in the long term.

My own digital audio workstation of choice is Pro Tools – not because I think it’s better than the others, but it’s the program that I learned to use first and have become most comfortable with. You’ll find that there’s a DAW just right for you as well.