Like many others, I’ve always felt that the growth of digital audio technology is one of the biggest reasons why you’re able to create and produce music in your own home studio. Without the technology and the massive use of computers and other digital devices, you’d still find music being recorded in large expensive studios using analog tape machines.

I think it’s important for modern-day recording engineers and producers to be aware of how the digital world works, so here I’ve outlined the basic principles behind the technology.

In very basic terms, a digital audio system is able to take a continuous analog signal and substitute it for a sequence of individual samples, all without losing any of the important information from the signal. The original analog signal can be rebuilt later on, from the original samples that were taken. 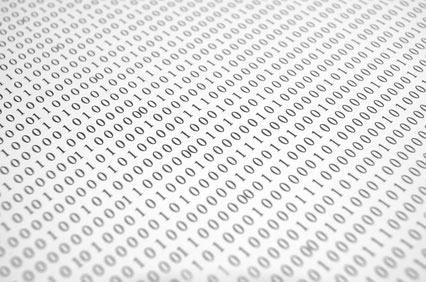 Digital audio technology systems use the binary number system for storing and distributing information. Decisions and operations in a digital system take place through the use of boolean algebra, and it’s a very fast and efficient way for digital devices to work. It’s especially important for computers.

The system uses ‘bits’ of data, either a 0 or a 1. This is binary coding. In a digital system, the 0 equates to the voltage being turned off, and the 1 means the voltage is turned on.

Each digit (a digit is referred to as a bit) in a binary code represents a different value. So for example, imagine this binary number (this is an 8-bit dataword, equal to 1 byte):

The sample rate of a digital audio technology system relates to how often the analog signal is sampled each second.  CDs use a sample rate of 44.1kHz. This means that the original analog audio signal has been sampled 44,100 times per second.

Audio on DVDs have a sample rate of at least 96kHz, or even 192kHz, one of the reasons why DVDs are said to have higher-quality audio than CDs. 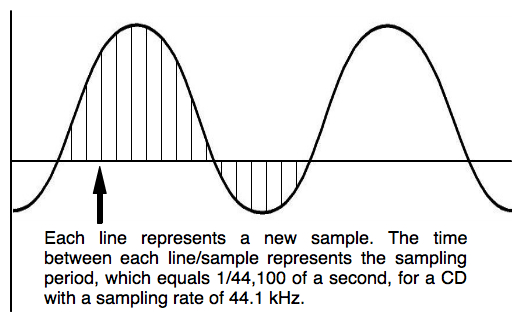 The sample rate also governs the highest audio frequency that can be sampled and stored (the range of frequencies that can be stored is known as the bandwidth). As humans, our hearing limit lies between 20Hz-20kHz, so in theory the system we use needs to be capable of reproducing frequencies up to this upper limit of 20kHz.

To accurately record audio signals digitally, the sample rate must be double the value of the highest frequency that we would like stored and reproduced. So if we would like our system to play signals of 20kHz, we must use a sampling rate of at least 40kHz.

This is why CDs use a rate of 44.1kHz – it’s so we can capture all of the frequencies that we can potentially hear and to help create a high-quality listening experience.

A sample rate of 192kHz can capture and record audio signals all the way up to 96kHz.

This frequency value of half the sampling rate is known as the ‘Nyquist frequency‘, after Harry Nyquist, an engineer who worked in early digital communications.

This method helps to prevent something called ‘aliasing‘, whereby signals above the Nyquist frequency get into the system and cause distortion.

Every time the audio signal is sampled (for example 44,100 times per second), the voltage level is taken and recorded as a binary dataword.

The higher the sampling rate, the more samples are taken each second, which means that the conversion of the analog waveform into the digital domain will be more accurate and more detailed (one of the reasons why 96kHz audio is seen to be higher-quality than 44.1kHz audio).

The second major area of digital audio technology is the bit depth. 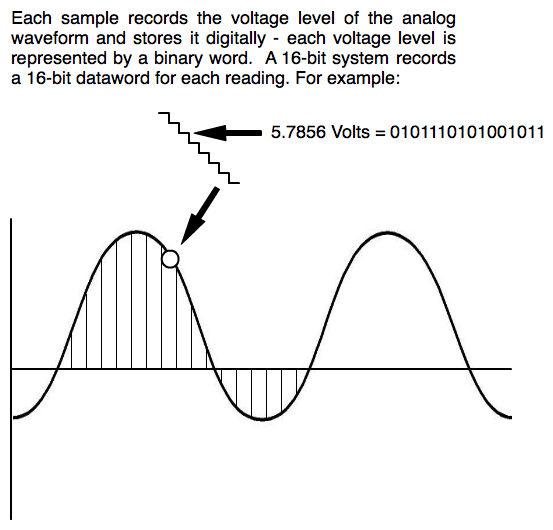 So the 24-bit word will store more information in it – which means the system’s resolution will be higher. The more bits there are, the more accurate the sample reading will be. The resolution is higher.

Imagine a large stack of piled paper in front of you, with each sheet representing one digital reading:

So the 24-bit system is much more accurate at storing an analog signal in the digital domain. This is one of the reasons some CD albums have been re-mastered and re-released as DVD-audio – the marketing departments at the record labels were keen to show-off the higher audio quality that you’d get with this newer format.

The sampling rate and bit depth of digital recorder systems are the terms that are most often heard when it comes to digital recording in the studio. These ideas can relate to recording music in a DAW, as well as the qualities of CD and DVD audio. Knowing what these names and numbers mean and what the theory is behind them will give you more of an understanding about the digital world that we’re surrounded by.

I hope I haven’t lost you too much in this discussion about digital audio technology – I know that these sorts of topics can appear confusing at first as it took me quite a while to fully grasp them. But I also hope you stick with it and try to understand it, as I think this kind of knowledge can only help you in your studio.