How to Use a Control Surface to Interact with Your Production 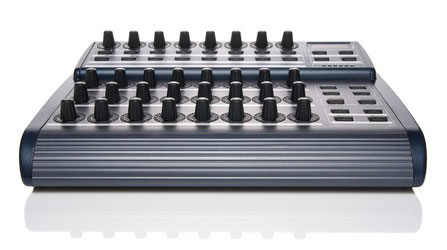 Using a control surface is the perfect way to interact with your software programs that you’re using to create and produce music. Having physical sliders, knobs, and buttons to push, or lights flashing in front of you, can help give you a better experience and a feeling of interaction during the process of making your own music.

When you’re directing everything in your computer with a mouse, it can sometimes feel as if you’re not really connected to your music and your production. Some producers I know say they feel a lack of connection or ‘hands-on’ control when they’re stuck to a mouse, something I’ve definitely felt at times as well.

There’s also the issue that you can only control one parameter at a time when using a mouse, whereas with two hands you can have more control over more parameters.

A control surface lets you control various parameters inside your software programs using your hands. Elements on the hardware device can be mapped to whatever software controls you want. Some of the things these devices allow you to interact with are:

I’ve often found that I enjoy the creative process more when I have a some kind of control surface in front of me. It feels like I’m actually using real volume sliders like on a hardware mixing desk. Or that I’m adjusting a real compressor or reverb unit by using buttons and knobs, instead of having to adjust everything with my mouse and keyboard.

I think it helps to develop a more ‘natural’ feel towards the process of producing your own music, and can help with your workflow and your creative juices.

But they aren’t for everyone. I’ve heard some studio folk say they find them clunky and that they’re only really found in studios because they have the ‘cool’ factor of looking like real mixing desks or effects units – especially when everything you’d use it for can easily be controlled via the software on your computer.

You’ll find a few different formats available to you in the studio, and each format can help you with various aspects of your creative process. The mixing board design usually provides transport functions, such as play, stop, and shuttle, as well as mute/solo and recording functions for each channel.

Some digital mixers also come with their own in-built signal processors and effects plugins that can help lighten the workload of your main computer’s processor.

You may find that a small USB MIDI controller will help you when changing the settings on your software compressor or reverb plugin – this is something I found to be very useful. Or maybe you’d like to have full mixing capabilities along with transport and recording functions – I don’t personally use this kind of hardware, as I find mixing inside a DAW suits my needs perfectly.

Using a control surface in your home studio really does come down to your own personal choice. I would take some time to think about whether you would find one useful in your own studio setup, and go from there.