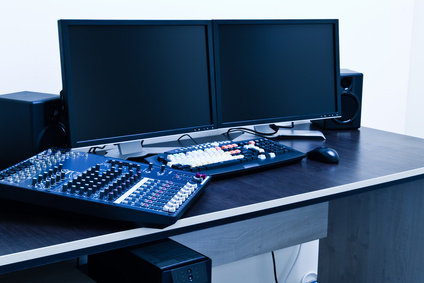 Setting up your home studio for computer music production can take a little time to get right, especially when it comes to choosing the computer to use and how to organize it.

The system you get and the settings you choose can impact on how smoothly the whole setup works. I’ve always thought it was worth spending some time on this early on – you don’t want to be interrupted by a slow or stalling computer every time you start some intensive production work.

There are two main types of computer that you can choose from – desktop computers and laptop computers (notebook computers aren’t powerful enough to be used for computer music production). They each have their own strengths, and I’ve found that what you choose to use largely depends on what your main goals are and what your budget is.

Laptops offer portability and if you plan on performing live, for example with Ableton, then a powerful laptop can be the main computer in your studio and on stage. But when you compare a laptop to a desktop with similar settings and components, a desktop will usually be cheaper – your budget can definitely go further with a desktop.

There are three big factors to think of when it comes to your computer:

Generally speaking, if you want a smooth running system you need good quality parts. Luckily, a lot of PCs today are pretty stable and solid, and Macs are always reliable machines. I think that if you have the available budget then a Mac would be the best option for a computer music machine.

But today’s PCs are much improved when compared to machines of the past, and with a little tweaking can be set up to be pretty reliable as well.

Computer Parts to Think About

The more memory, the better – this really can’t be stressed enough. These days, I’d advise to get at least 4 GB. The more RAM you have, the more tracks, plugins, samples, and software instruments you can have open at any one time before the system starts to struggle.

Ideally you should aim for at least a dual-core, but these days I would definitely recommend a quad-core. It will be more efficient and more powerful, and better for working with and processing audio and production programs. The more power you have in your CPU, the faster and more stable your system will be.

The larger the drive, the better, as you’ll be able to store more tracks, recordings, and samples. Nowadays, it’s easy to find systems with at least 500 GB of drive space. Hard disk drives (HDDs) are also relatively cheap, so get as big a drive as you can with your budget.

HDDs can have different speeds, the most common being:

I recommend a speed of at least 7,200 rpm for computer music production. Anything less and your system may become strained.

It’s always worth having two HDDs in your system – one as the main hard drive for your computer, and the other as the main audio drive, where you save all your audio recordings and all your samples. This leads to a much more efficient and stable setup.

It’s also a good idea to partition your audio drive into two drives – one for audio, the other for samples (these are samples that come as large sample libraries, like the popular orchestra libraries found today. The samples are loaded into RAM when the sampling program is opened – they aren’t streamed from the hard drive. Another reason to get as much RAM as you can).

With a desktop, you can house both drives in the case or have the second drive externally (the best connection being FireWire 800, then FireWire 400, then USB 2.0 or 3.0). If you’re using a laptop, this second drive will always be an external drive – use this drive as your audio drive, again connected via FireWire or USB 2.0/3.0.

There are a few adjustments you can make, in both PCs and Macs, that will help your system be more solid and reliable. The main goal is to have as much of your computer’s resources dedicated to your audio and production work as possible. Some of these tweaks are:

Setting your system up for studio work can be tricky and sometimes frustrating to get right. But it’s always worth taking the time to make a few adjustments early on – you’ll have a smoother running system because of it.

If you still get problems after you’ve made these sorts of changes, then don’t worry too much, be patient, and have a look on the internet for solutions – it’s very likely that someone else will have had the exact same issue as you with their own computer music production setup, and there will probably be a solution already out there as well.

What is a Digital Audio Workstation?
A Simple Guide to the Inner Workings of Computers
Use a FireWire or USB Computer Audio Cable for Quick Connections
How Audio Latency Can Affect Your Recording and Mixing