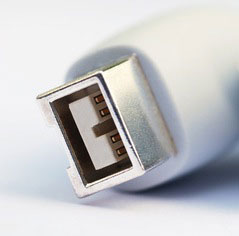 Using the right type of computer audio cable to connect your devices together is vital for your studio to run smoothly. These days, equipment such as an audio interface, a digital mixing board, or an external hard drive are usually connected to your studio computer through a FireWire or USB cable.

There are many other types of audio connection that are found across the studio, some of which I’m sure you’ll likely need for your own setup. But connecting important bits of gear to your computer requires a different type of connection – one that will transmit data quickly and efficiently between your devices without losing any of the important information.

I think both FireWire and USB cables are definitely the choice to make when it comes to selecting what to use. Exactly which one you’ll use depends on what equipment you have in your studio setup.

FireWire is a high-speed interface standard that was created by Apple in the late 1980s – it’s their own version of the IEEE 1394 interface, IEEE being short for the Institute of Electrical and Electronics Engineers. It can be used for both audio and video transfer (or any kind of data transfer, especially data that needs to travel at high speeds), between computers and other devices.

There are two common FireWire audio connections that you find in most studios these days – Firewire 400 and FireWire 800.

FireWire 400 has the following features :

FireWire 800 has similar features, with the following differences:

These days, FireWire S1600 and S3200 are also available but only on a limited number of consumer products. They have speeds of 1.6 Gigabit per second (Gbit/s) and 3.2 Gbit/s, and they both use the same 9-pin beta connector as the S800 version. But at the moment there are very few products available for the music studio that use either S1600 or S3200.

The Universal Serial Bus interface was created in the mid 1990s, and is the other main high-speed connection found on digital studio devices like computers and sound cards. USB microphones are also becoming more popular, especially in the podcasting world.

Each USB computer audio cable is compatible with each of the others, and the ports and connectors are also the same.

Today’s studio devices, like sound cards and mixing desks, use both USB and FireWire connections for their high speed and reliability. External hard drives can use both forms of computer audio cable as well. Before purchasing anything new for your studio, I highly recommend you check for USB or FireWire compatibility.