Building up your own home recording studio when you’re on a budget can be a challenge, especially when you want the best quality that you can get. If you’re looking for the best vocal microphone under $500 –  well-priced yet of excellent quality – you’ve come to the right place.

Here we will give you the lowdown on the RØDE NT2-A vocal microphone.

Don’t worry, it’s definitely possible to fully show your talent by purchasing the best vocal microphone in this price range. You don’t have to spend thousands to get incredible recordings in your studio.

RØDE is an Australian-based company founded in 1967 as Freedman Electronics. The company first started out mainly making loudspeakers and amplifiers. Nowadays the company mainly concentrates on microphones, along with iOS audio software and microphone accessories.

RØDE developed the first NT series of microphones in the early 1980s. The company’s manufacturing suppliers were based in China but later moved to Australia to upgrade its microphones. To start distributing their devices, RØDE started cold calling musical recording studios in Los Angeles. This resulted in the company’s very first international order of 100 NT2 RØDE microphones.

Since the development of the NT2, it has undergone numerous upgrades. They now use Australian internal parts instead of the original Chinese components. This resulted in the new RØDE NT2-A mic. During this change the quality of the microphone improved, yet the price remained virtually the same as it’s predecessor. It’s one of the reasons this model is so popular.

The RØDE NT2-A is essentially a condenser studio microphone with multiple polar patterns. It can be used to record various instruments but is mainly used for recording vocals. You can also get great success with it on other instruments that carry lots of high-frequency detail, like acoustic guitars and pianos.

The NT2-A has multiple switches to change up the polar pattern of the microphone. This makes it an excellent tool for recording numerous sounds coming from different directions, such as group vocals and drum overheads. It’s also great for piano players and solo vocalists.

This mic can be used on a range of recording projects. It’s mainly suitable for aspiring singers or project studio owners who work on tight budgets but want to build up their own home studios. But it’s also brilliant for professional studio producers and students who are studying sound engineering.

It’s not really suitable for anyone who doesn’t recognize or understand how microphones work in terms of their polar patterns and frequencies. However you’ll find a multitude of tutorials and write-ups about how to identify the best microphones to suit you and your vocal and recording abilities if you’re new to making music – including on this site.

The RØDE NT2-A is a mountable microphone which makes it quite difficult to use as a handheld device as it has a wide frame and it’s quite heavy. It can be used for live performances but it’s better suited for studio recordings rather than stage productions.

The NT2-A has been upgraded quite significantly over the years, not only externally but internally as well. You can now choose between a 40 Hz or 80 Hz low-cut frequency, which is mainly used to filter out movement, low rumbles, or background noise.

You can also switch between cardioid, omnidirectional or figure-of-eight polar pattern modes – the pattern you choose will depend on what you’re recording and how you’re recording them (most home studios will stick to cardioid as this will record most of the direct sound and little of the room sound).

With these new added switches to the upgrade, you’re able to quickly optimise your recordings without spending too much time on the technical side of your engineering.

As an added extra, the new RØDE NT2-A comes with a pop shield and an SM6 shock mount that cradles the microphone. Along with the high-pass filter they also help to remove any unwanted bumps, knocks, and low-frequency rumbles.

As with any studio microphone, you’ll need a mic stand to position it correctly when you’re recording. You can easily pick up a decent mic stand these days that won’t break the bank, so I’d always recommend picking a stand up when you purchase a new mic.

It also comes with an added downloadable video tutorial on:

What makes this microphone so brilliant is even though the new and improved NT2-A comes with added accessories, the value of it is virtually the same as the older version. Here is a detailed un-boxing video of what you will get when you purchase this microphone package:

The Best Vocal Microphone Under $500 – Overview And Features

The new and improved RØDE NT2-A has a large 1″ capsule and is a condenser studio microphone, so it will need a source of phantom power. Any decent audio interface will provide you with this at a push of a button.

It’s durable exterior makes it suitable for almost any recording environment. The head of the microphone also has moisture control (as do most vocal microphones these days).

The NT2-A is very secure when clipped into the shock mount so there will be no issues in the recording studio in terms of noise from movement of the mic. This product can be set up through any audio interface which makes it ideal for computer-based recordings in a home studio. All you need is an XLR cable to connect the mic to the interface.

All internal and external components are manufactured in Australia to an extremely high standard. This helps you identify the credibility and trustworthiness of all RØDE microphones.

How To Use The NT2-A Microphone

The RØDE company was kind enough to include a detailed downloadable tutorial which will be included in the microphone package you purchase.

If you’re still deciding whether or not you should get one of these vocal mics, then check out this video that explains the difference between the NT1 and the NT2-A:

The RØDE NT2-A is not an expensive piece of recording equipment, which makes it perfect for home studio use and vocalists on a budget. However, due to it’s technical nature there may be a more affordable and user-friendly alternative that you can use.

For an entry-level microphone you could use the MXL 990. It’s also a high-quality condenser microphone that comes with all the extras you need, such as a sturdy shock mount and a carry case. The MXL 990 is used in both digital as well as analogue recording studios. It’s just as capable as any other condenser microphone, only with fewer features included with it.

The MXL 990 doesn’t have as many polar pattern adjustments as the RØDE NT2-A but it definitely caters more for the novice home studio recorder. The MXL 990 can be used for:

So you could try the MXL 990 microphone as a starter and perhaps work your way up to using the RØDE NT2-A somewhere further down the line. It’s totally up to you and where your budget currently sits.

But remember that you don’t actually need much to get started making your own music. The basics to get the ball rolling would be:

Once you’ve started you can add more to your studio set-up over time, but you don’t need a huge amount to get things going.

Having the ability to record vocals in your home studio, whether it’s your own singing or you’re recording another talented vocalist, is a true privilege we have. But without the correct equipment your goal of sharing your music with the world would not be possible. Using incorrect or unsuitable studio equipment could be detrimental to your new budding career as a vocalist or producer.

Finding equipment on a budget is easy, as the RØDE NT2-A is an extremely versatile microphone to have in your home studio. It’s the best vocal microphone under $500 that I’ve come across in a very long time.

So whether you’re looking to become the next Beyonce or if you’re just looking to record your own music as a part-time hobby, you’ll still want top-notch sound quality. Get hold of the RØDE NT2-A microphone and let your journey begin. 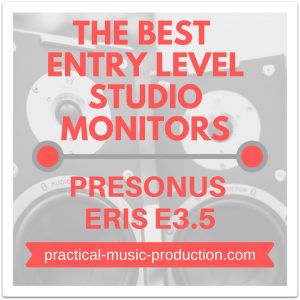