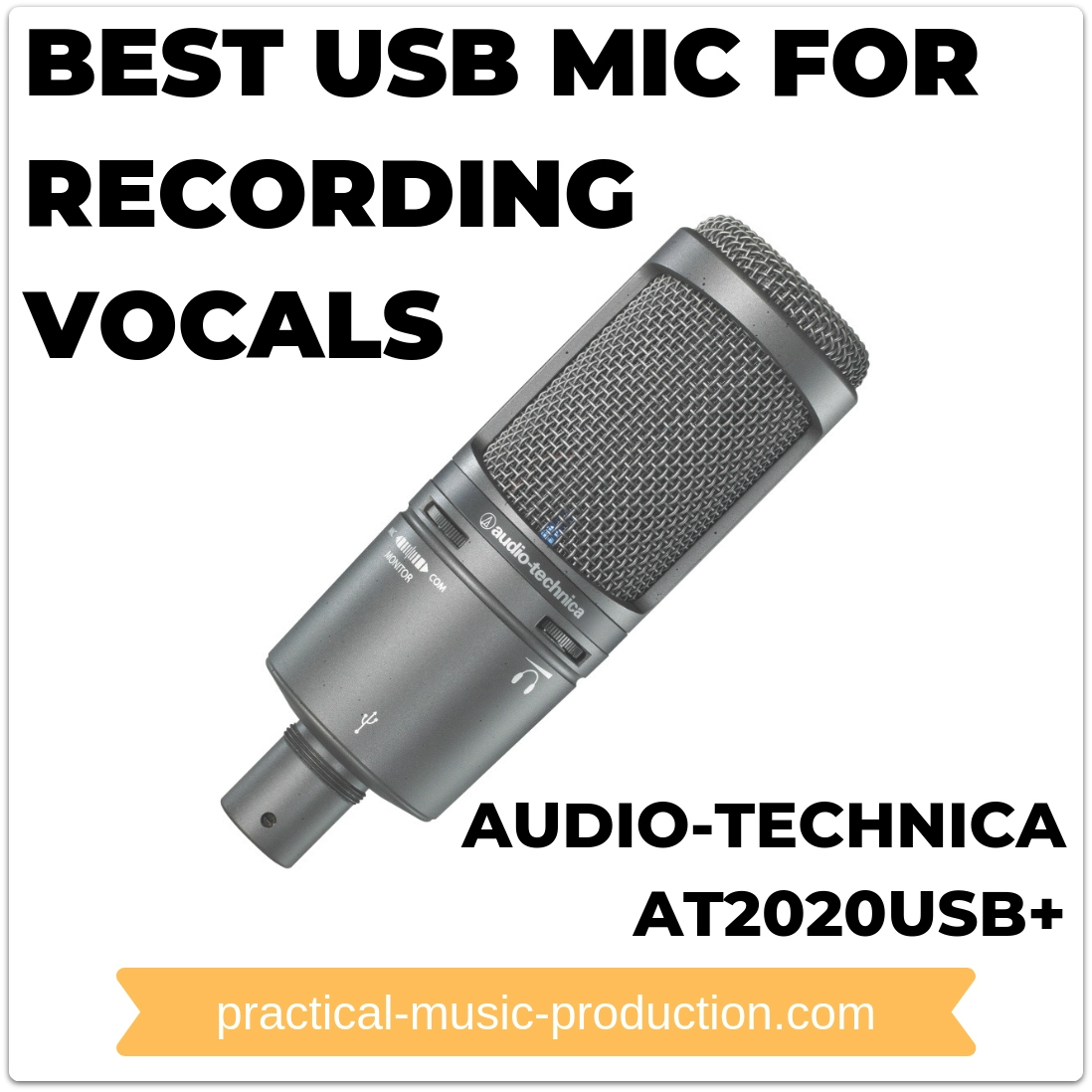 Not everyone who’s interested in making their own music wants to buy loads of gear straight away. But that shouldn’t stop you – if you’re looking to record some singing, then you’ll want the best USB mic for recording vocals to get things rolling.

Digital studios are the studios of the future – they provide you with a lot of the functionality of a full recording studio integrated into a PC, Mac, or laptop. So how do you record music with a digital studio?

All you need is a great USB microphone that connects directly into your computer without the need for an audio interface. Luckily for you, we’ve found all the information you need on this mic. Keep reading to find out what the Audio-Technica AT2020USB+ can do for you.

Almost exactly like the AT2020, the AT2020USB+ is a cardioid condenser microphone used to record instruments and vocals, and to transmit audio for radio and video.

The main difference between the two microphones is the AT2020 needs phantom power via an XLR mic cable, whereas the AT2020USB+ gets it’s power from the USB cable connection to the computer. You can record in a studio using either mic.

The AT2020USB+ can be used with any digital music recording studio and it’s compatible with Windows and Mac OS X. Both microphones have the same frequency response as well – 20Hz to 20kHz.

One of the benefits of a USB mic is the portability and ease of connection. There is only one connection for a laptop or PC and you don’t need an additional external audio interface or a mixer to set it up. Another important feature is the AT2020USB+ has a cardioid polar pattern – this is the best type of pattern for recording vocals, podcasts, or instruments in a studio.

The cardioid polar pattern captures the sound entering the front of the microphone perfectly. It doesn’t pick up the sound from the sides or the rear of the mic very well at all, so background noises or reflections from the recording room are minimised.

The Audio-Technica AT2020USB+ is designed for those who want to produce the finest-quality audio but without the need to build a full studio or isolation booth. USB-based microphones are aimed more towards podcasters and are best suited for the spoken voice, but they are cross-platform mics and can be used to record as well.

Cross-platform means you can use the microphone for virtually any recording or transmittance of sound for a number of varied projects. Here we will take a look at what you can do with the AT2020USB+.

As mentioned before, using a USB microphone instead of an XLR is suited for those who don’t have an isolation booth or expensive recording equipment – so it’s best suited for a vocalist on a tight budget.

Because of the cardioid polar pattern, the microphone will transmit vocal recordings clearly without detecting background noise or electronic interference. This makes editing and producing easier and faster as the captured audio will be cleaner and of high quality.

The Audio-Technica AT2020USB+ can be used by podcasters who aren’t able to use high-end equipment when starting out. If you have a camera recorder with a USB port you can easily connect your mic to start making videos with quality audio.

It’s best to place the mic directly in front of your mouth so you can record clear audible sound, so it will be well suited for podcasters who do voiceovers on their videos.

If you love creating YouTube tutorials the AT2020USB+ is a microphone you can use as well. Usually, tutorials require the use of your hands to show your audience how to make food, products and general arts and crafts so using a mountable mic is more convenient.

Interviews for Radio and TV

Cardioid microphones are ideal for radio and TV interviews. When you listen to a radio talk show or you watch interviews on TV you hardly ever hear background noise.

The AT2020USB+ can be used for professional TV and radio, but the mic is probably better suited for students and beginners due to the low price. Some professionals simply prefer to use more expensive microphones as they believe it provides better quality audio recordings.

Is it Easy to Use?

The AT2020USB+ is very user-friendly and convenient to use for anyone, from newbies to pros. The mic doesn’t require any technical knowledge so students, hobbyists and beginners can definitely use the AT2020USB+ without feeling overwhelmed.

If you’re more into the technical side of things in areas like music production, the AT2020USB+ can also benefit you as the specs are perfect for recording digital tracks into your computer. You can use the AT2020USB+ for any media project and it’s suitable for those who are tech-savvy as well as those who aren’t.

The AT2020USB+ comes with a few additional accessories that the normal AT2020 doesn’t contain. These include:

Unfortunately, the AT2020USB+ doesn’t come with a pop filter, although it does have an extra thin integrated mesh layer around the capsule. It’s advisable to get a pop filter if you’re going to record vocals as it will help reduce the popping sounds generated by singing.

If you’d like to see more of what you get with the package you can watch the unboxing video below.

The front of the AT2020USB+ is slightly different to that of the AT2020, as there is an integrated blue LED light on the mic to indicate that it’s connected to a power source. There’s also a control dial to mix between the microphone and your computer audio.

The AT2020USB+ has a port which allows you to plug in your headphones straight into the microphone, allowing you to hear exactly how your voice will sound when you sing or speak into it. There’s also a volume control on the mic for the headphones when recording audio into it.

Overall the AT2020USB+ microphone, as well as the mount and stand, are all made from a robust black cast metal for toughness, durability, and for visual style as well.

The installation of the AT2020USB+ is very straightforward and you don’t need any additional tools to set it up. The microphone mount can be installed quickly and easily in any home-based studio. To plug in your microphone all you have to do is connect the USB cable to your desktop computer (PC/Mac) or laptop.

Mixing may be a bit tricky for the beginner but you can watch this video regarding an audio test – you’ll see and hear how your mic can record and capture sound for instruments and vocals.

Alternatives to the Best USB Microphone from Audio-Technica

If you’re looking for a more versatile recording microphone with multiple polar patterns, then the Blue Yeti USB microphone may be more convenient for you. It’s cheaper than the AT2020USB+ mic and comes with a few additional specifications.

The build quality alone is impressive as it’s made from an all-metal exterior. On the mic interface you’ll find a volume controller you can use to adjust the sound your headphones are monitoring. Above this control there is a mute buttonwhich turns off all audio transmittance when you push it.

On the back of the microphone, there are two rotator controls. The first knob is used to adjust the gain of the microphone which simply changes the volume of the transmitted audio. To change the polar pattern you can use the second integrated controller.

Unfortunately, the Blue Yeti doesn’t provide you with added accessories that the AT2020USB+ offers but this microphone packs a major punch in terms of technical specs:

The Audio-Technica AT2020USB+ may not have multiple polar patterns but you won’t need really these if you’re only using the microphone for vocals, podcasts, and voiceovers. You’re still able to produce an incredibly crisp and clear sound for any recording project you want to get involved in.

If you’re a music producer on a budget, the Audio-Technica AT2020USB+ may be just the microphone you need to record and your music tracks in your home studio.

So why not give the best USB mic for recording vocals a go with the AT2020USB+ and see how it could change the quality of your recordings, making your music truly pop from the speakers.