Have you ever wondered what sort of microphones the godfathers of rock & roll used? Their recorded albums always made you feel like you were sitting right there in front of them. You can be sure the best microphone for rock vocals would be in their studio selection.

Although the rock legends had powerful vocal abilities they needed microphones brilliant enough to project their rock & roll melodies to the entire world.

The Shure SM7B has been used by many great rock vocalists, like Billy Joe Armstrong from Green Day and Serj Tankian from System of a Down. You should consider whether this is what your studio is missing. The right equipment can be as important as all those hours of practice you put into developing your music.

Shure is one of the most popular and well-known microphone manufacturers in the world. Every studio, both home and professional, will have a Shure microphone in their arsenal. The most well-known are the SM57 and the SM58, but the SM7B is a vocal mic that’s also worth your time.

The Shure SM7B is an industry standard dynamic vocal microphone used to record vocals in the studio. It’s also commonly used for radio broadcasting. The SM7B can also be used to mic bass cabinets and to do live or recorded podcasts.

Shure is an American audio productions company founded by Sidney N Shure in 1925. As well as making world-class studio microphones, the company has also become one of the world’s biggest and well-known builders of headphones, earphones, and wireless microphones. They also produce microphone mixers and vinyl cartridges for DJs.

The Shure SM series was developed in 1965; however, the SM7 made it’s debut in 1973 and was originally used as a broadcasting microphone as well as in the studio as a vocal mic. Lots of different artists started using this mic to record studio vocals. Most notably it was used a lot by Quincy Jones in the 1980s to record a lot of the vocals on the albums he produced.

And if you need further convincing, the SM7 has also been used by the likes of Bob Dylan, John Mayer, and Sheryl Crow.

The Shure SM7 has since been upgraded: first to the SM7A in 1999, and then the SM7B in 2001. The SM7B comes with a larger foam windscreen and has now been manufactured with a double coil to reduce potential interference from nearby electronic devices. This can be common in home studios as electrical cables are often close together.

Who is This Product For?

If you’re an upcoming rock artist or you record rock music in your studio, this microphone is an excellent choice for you. With its dynamic output abilities, the SM7B is designed to eliminate any kind of background noise making it perfect for recording in a home studio.

Try as you may, the SM7B is not made for all types of vocal styles. In particular, this mic is ideal for heavier vocals, as dynamic mics are best suited for the rock genre. It’s definitely the best mic for screaming vocals. Dynamic mics have a pronounced midrange and can handle a high SPL (sound pressure level) making it ideal for recording distorted, aggressive rock vocals.

There are better options out there if you’re looking to record vocals that are ‘cleaner’ and not rock-based. It would be better to start out with a Shure SM57 or SM58 microphone and then work your way up to the SM7B, especially since the latter is quite expensive.

The SM7B is essentially a microphone to be used in close proximity to whatever you’re recording, so it’s not ideal for group vocals such as choirs and it’s not the best for recording acoustic guitars or other instruments that contain a lot of high-frequency detail, such as a piano.

The SM7B now comes with a bigger windscreen to eliminate background noise and frequencies. This is ideal if you’re recording with computers or other high frequency electronic devices. The mic also comes with a stand adaptor and a cover for the back panel of the mic, and you’ll receive some nice little extras like a Shure sticker.

In this video it shows you exactly what you’re paying for, and it will also show you a few mic tests.

Remember that knowing everything you can about your equipment can be just as important as the vocal talent when it comes to capturing excellent recordings. The more you know about a mic, the better you can use it and adapt to any studio situation you come across.

We all know the phrase ‘knowledge is power’, and when it comes to microphones this is definitely true.

The Best Microphone for Rock Vocals – Overview and Features

The Shure SM7B gives you the ability to adjust the tone of your microphone with the bass roll-off feature. This helps you with the mic’s frequency response and complimenting your type of vocals. It also has a mid-range boost control directly on the mic, perfect if you really want to capture a more aggressive rock-style vocal performance.

It has a tough and durable exterior, which allows you to travel with your microphone without worrying about it getting damaged. Some microphones can be quite delicate, so travelling with them can always carry a risk.

The SM7B isn’t suited to being a handheld mic as it’s physically quite broad, but it can be easily mounted on a stand. Unfortunately this mic doesn’t come with an additional stand so this will need to get one of these as well.

This is a dynamic microphone so it doesn’t need phantom power to work (that’s only for condenser microphones). It also has excellent off-axis rejection, so any sounds entering the mic from angles not directly in front are minimised.

It also has an adjustable bracket so you can move the mic around to find the best position for recording in your studio.

How to Use the Shure SM7B

If you’re a beginning sound engineer or a rookie roadie, you will need to know how to set up a microphone.

The SM7B may be easy to set up but the sound aspect can be quite involved for a beginner. You can check out this short YouTube video on how to set up the sound for the Shure SM7B. Remember what we said above about learning as much as you can about your mics.

The SM7B might be amazing for an aggressive vocal range or an overloaded guitar amp, but it may not be that great for softer sounds and more detailed sounds – think acoustic guitars and pianos especially.

If you want to experiment with different sounds and applications you could try a wide range of Shure microphones. The Shure SM57 and SM58 are a great start as they’re designed to record electric guitars, drums, bass guitars and even pianos and keyboards.

This mic is basically the powerhouse of all rock & roll microphones. Although it is quite pricey, it’s definitely worth it as you can easily use it for a number of different instruments and recording projects.

Selecting the correct mic to suit your vocals can be a bit tricky; however, there have been so many great artists from different alternative genres that have made the Shure SM7B microphone work for them – from Anthony Kiedis from Red Hot Chili Peppers to James Hetfield from Metallica, two completely different sounds, and yet both from the same microphone. You can guarantee that singers like these will only choose the best microphone for rock vocals, given their worldwide success and popularity.

If you dream about making your own incredible music and you want to record that great album, make sure you’re able to capture some solid vocals in your home studio and simply get this mic. It’s a great way to optimize your recordings and your audience’s experience of your productions. 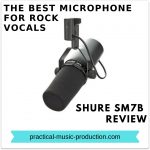