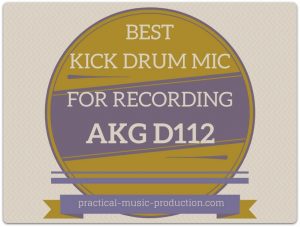 Do you want just the right level of low-end bass in your mix? Ask any serious musician and they’ll tell you that one of the main instruments that’ll help you achieve it is a kick drum. And for that it’s ideal to have the best kick drum mic for recording.

In my opinion the AKG D112 is that microphone. We’ll quickly outline all you need to know about this particular kick drum mic and you might just realize that it’s exactly what is missing from your studio.

When the D112 was first released in 1986, it was every sound engineer’s preferred kick drum microphone, by far. It was a very common sight in most recording studios and live stage performances, and still is to this day.

There are a few reasons why it’s so popular:

However, as the popularity of these specialist kick drum mics increased, AKG had to make some improvements so it remained competitive. It was upgraded to the D112 MKII with improvements made to all aspects of the mic’s performance.

The original stand mount was the greatest drawback on the D112. Compared to the other microphones it wasn’t as wide which made it pretty difficult to mount accurately. AKG realized this and made sure it was wide and flexible enough for easier positioning. After all, accurate placement is paramount to get the sound you want.

There were some other improvements as well, including the following:

If you want a solid and punchy low-end bass to come out of your speakers, picking this mic could be the solution to your problem. Artists and sound engineers will particularly find this product useful as it’s designed to improve the bass levels in your studio recordings and mixes.

For the longest time expensive kick drum mics such as the D12 dominated the market. Thankfully AKG came up with the D112, a more affordable option with an economical design. Because it’s so easy to use even beginners won’t have any difficulty operating it.

Heavy hitters on the kick drum will also find it extremely useful, as the way it captures the low-end frequencies means you’re never likely to overload and distort your kick drum signal when recording.

Inside the box you’ll find the following:

You won’t need anything else when it comes to using this mic. It’s easy to set up, and it’s incredibly simple to capture bass-heavy recordings. This is the only mic I use these days when it comes to kick drums, and I also regularly use it on bass guitar amps as well alongside a condenser mic like the Audio-Technica AT2020.

The essence of this microphone lies in its bass capabilities. This is largely determined by the size of the diaphragm. AKG understands this and made sure the D112 has a large diaphragm – perfectly suited to record a wide range of bass instruments.

As mentioned earlier, it has a very high sound pressure level (SPL) capability of 160dB, which is a huge figure – a figure that you’re very unlikely to ever get near in your home studio. This is basically the maximum sound pressure level the mic can handle without distorting. Basically, the higher the SPL figure, the more volume the mic can handle.

It features a combination of blue and gray on the outside and weighs just over 1 lb, so you can tell it’s a relatively lightweight unit.

Another of its impressive features has to be its frequency response which extends all the way down to 20Hz. It’s response between 20Hz-100Hz is especially powerful, helping to capture those all-important low bass frequencies. Its overall frequency response is 20Hz-17,000Hz.

What identifies the sound entry side is the large green bumper band. The D112 is a dynamic microphone so it has a directional cardioid pickup pattern. Any sounds coming from the sides or rear of the device are not picked up by the mic very well.

The D112 is the perfect bass mic for a home studio, a project studio, and a professional studio. It’s also the best kick drum mic for live sound and live performances. This classic mic can be used for a kick drum or bass guitar amp, but it can also be used on other drums and percussion instruments, as well as guitar amps.

As mentioned earlier, the accurate placement of the mic will make the difference between a clear sound and a muffled one. However accurate, mic placement is really a process of trial and error. We’ll quickly outline a few pointers so you get the best sound possible (the below video also guides you through the process in setting up the D112 in the studio):

Generally the setup process is quite simple. However you can use the instruction manual provided for clarification where necessary. But as with all mics, a bit of trial and error can mean you learn a lot about how a microphone works in different positions.

With any product you’re bound to find a number of competing brands – some more expensive or cheaper depending on your budget. Where functionality is concerned the AKG D112 generally offers exceptional performance. However, one of the slight letdowns is the plastic mic clip which can leave a lot to be desired.

A worthwhile alternative to curbing this problem would be to purchase the MS7701B Euro Boom microphone stand. Here’s why: the clip offers a robust and secure form of microphone attachment, making sure the mic doesn’t move or fall once it’s been set in its recording position.

Unlike the AKG D112 which comes with minimal accessories, the opposite is true of the Euro Boom mic stand. It comes with the following selection:

However, the above isn’t an exhaustive list of the accessories it comes with. The manufacturers of the MS7701B mic stand even went as far as including a cup and accessory holder for easier handling and storage.

When it comes down to it, it’s clear that the AKG D112 mic is the preferred and desired kick drum microphone among most sound engineers and home studio owners. It works incredibly well with kick drums and bass guitar amps, making it a versatile unit for all your low-end bass needs.

The fact that it doesn’t need an additional equalizer makes it an even more attractive option. Also, no matter how much of a heavy drummer you are, it’s designed to keep noise to a minimum while not compromising the sound quality.

It’s not a cheap kick drum mic, but the above confirms why it’s the industry benchmark where performance is concerned for recording kicks and bass. Beginners or advanced artists will definitely find it pretty handy thanks to its ease-of-use and fantastic results. So, the next time you’re looking to get more bass out of your instruments, mixes, and productions, give it a try. It’s by far the best kick drum mic for recording.