Every singer knows that a stellar performance doesn’t only rely on talent. Do you as a singer know that your choice of microphone could make or break your performance? There’s a reason the Shure SM58 Microphone is one of the best affordable vocal mic options in the world. When it comes to quality and performance, few microphones do better.

Whether you’re performing on stage or making a recording, the Shure SM58 enhances your vocal abilities so your own talent can shine. The best part is that it’s on the market for a reasonable price, so you can deliver a sensational performance without spending too much money.

The Best Microphone for Recording Vocals

The SM58 was originally designed for studio recordings but its impeccable ability to isolate sounds and cut out background noise has elevated it. Now it’s the favored microphone of lead vocalists as well as backup singers all over the world.

The dynamic microphone uses top-notch technology through its spherical filter which helps to minimize wind, as well as plosive noises, resulting in clear vocal quality. On top of that, its design ensures that it’s durable, so it can withstand hours of use. For such a reasonable price, both reliability and performance are guaranteed.

Whereas previous microphones meant that singers were forced to use a mic stand, the SM58 helped birth the lively performances that we’re familiar with today. Its ability to cut out background noise means that performers can move across the stage while maintaining immaculate vocal quality.

Don’t think that because it was designed in 1966 the technology is outdated. Every year the SM58 is improved to uphold a modern standard. But it’s the core technology that has made it a legend for over 50 years. No matter what model you buy, the ball grille design has stood the test of time.

In fact, the famous silver ball grille was first used on the SM58 microphone. You may see pictures of the mic where the grill itself is dented – this is a design feature. When the grill is banged or dropped, the grill will dent so the force of the shock is absorbed and the inner workings of the microphone ate protected.

There’s also a black version of the grill available if you’d like a change from the signature silver grill.

Studio recorders were the initial target market of the SM58. Due to the pristine quality of the sound created, playbacks were almost always perfect.

Anyone who is looking to record in their own home studio should pick up the SM58. It’s a staple microphone for nearly every studio around the world – home studios and professional studios.

You’re guaranteed to get great results if you’re looking to record any of these:

You’re guaranteed to get incredible results when recording vocals. The SM58 tunes into and focuses on the frequencies that give warmth and clarity to a vocalist’s delivery. Even though it’s on the lower end of the budget scale when it comes to microphones, you’ll still find the SM58 used in the top professional studios around the world.

You’ll also get fantastic results on guitar and bass amps. As the SM58 is a dynamic microphone, it easily captures all the power and energy of the amp being recorded.

The Best Microphone for Live Vocals

Today, professional live vocalists are some of the main users of the SM58. Iggy Pop, Henry Rollins, Sheryl Crow, Demi Lovato and even Cage the Elephant have all been known to use the SM58 mic. Although the microphone is still also used in studio recording, it’s pure sound quality adds a dynamic vigor to any live performance, and is often considered the best microphone for live vocals.

The SM58 is also popular among backup singers due to its ability to refine and focus sound. This allows for an exhilarating layering of vocals that energizes and harmonizes any performance.

Amateurs don’t need to fret because the SM58 is incredibly easy to use. Although it is designed for use by professionals, any aspiring singer or backyard band can benefit from use of this mic.

It’s not only just for performers either. Any event that requires public speaking is guaranteed to have crisp sound quality with the use of the SM58. Even if you’re only recording a YouTube video, the SM58 promises a clear delivery. If a situation requires decent sound quality, whether its indoors or outdoors, this mic should be on hand.

The best part is that you don’t have to earn the same salary as Iggy Pop or Demi Lovato to be able to afford one. Shure SM58 microphones are available for under $100 – meaning you can get great quality without paying an excessive amount. The result is that few vocalists are excluded from being able to get one, boosting its popularity even further.

Along with the microphone, any standard SM58 box contains a user’s guide to help you set up your mic. All valid warranty slips are also included. It also contains a microphone clip so you can attach it to a stand if you prefer a classic approach. If you prefer to bounce around the stage, the box also includes a Velcro strap to ensure your mic doesn’t fly out of your hand.

One of the stylish additions added to the box is a leather pouch so you can keep your mic safe and protected from wear and tear. It even includes a Shure sticker so you can show your support. You can watch the following video if you want to check out all the items.

Unfortunately, a standard SM58 box doesn’t include any cables. This means that to attach your mic to your studio or audio interface you will need to buy an XLR connector or pay extra to include one with your purchase. Don’t worry though, they’re not too pricey.

Here are a few of the SM58’s best features:

The SM58 is really easy to use. Simply plug it in and turn on the switch. You will need an audio interface to set your mic up. You can also plug it into your computer if you have an XLR to USB cable, although this is not recommended as the sound quality will be poorer. The following video shows the basics on how it works, as well as the quality in different scenarios.

Here are a few pointers on how to get the most out of your microphone:

If you’re hoping to get rid of cables entirely, there are Shure SM58 wireless options available. These options cost more and come with receivers so you can use your microphone without plugging it in. We recommend the Shure BLX24R/SM58 as it has all the quality of the original SM58 with an added receiver so you can be more mobile.

Although the SM58 does pick up instruments really well, it has always been better suited for vocals. Other mics that will guarantee a great instrumental performance are the Shure SM57 (great for guitar amps) or the AKG D112 (perfect for bass amps and kick drums).

In fact, the SM58 shares the same inner design as the SM57 (both use the Unidyne III mic element). But whereas the SM58 is geared towards vocals, the SM57 is better suited to recording instruments in the studio.

Whether you’re hoping to deliver the greatest performance of your life or even become the next YouTube star, this is the microphone for you.

The SM58 microphone promises crisp sound quality that has been the industry standard for 50 years. Its price tag also means that it’s a viable option for almost anyone. Truly, it’s the best affordable vocal mic in the world.

Do you want your talent to have the proper platform to shine? It can start with this microphone. 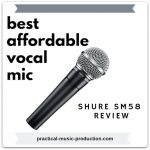