What an Audio Limiter Does in the Studio

The audio limiter is a very similar tool to the audio compressor in that it reduces the dynamic range of a signal that passes through it. A compressor gradually reduces the signal level above a certain threshold, but a limiter completely prevents a signal from going over a specified setting – a limit that nothing can go over.

I usually find myself using a very gentle limiter when recording things like vocals or guitars. You can set the limiter so that it catches and prevents any of the signal from clipping and distorting – it’s a very useful way to ensure your recording signal doesn’t go ‘into the red’.

You’ll find dedicated limiters in most studios these days, both as hardware devices and as software plugins, and your own home studio DAW will likely have numerous limiter plugins included with it. A compressor can also be used as a limiter if you set it up with certain settings.

The ratio setting on an audio limiter (also known as a sound limiter) is usually set at 20:1 or higher, going up to infinity:1 (∞:1). This is the biggest difference you’ll find between a compressor and a limiter. 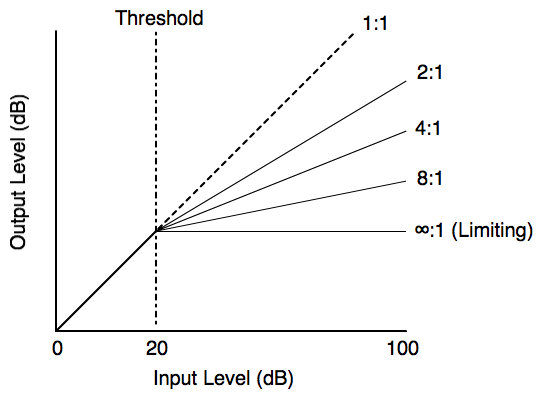 Some limiters offer controls over attack and release times, which act the same way as on a compressor. The attack time is usually set to be very fast on a limiter, if not ‘immediate’ – a setting of zero seconds. Both settings should be configured carefully, as they can easily affect and color the sound and cause audible ‘pumping‘, where the signal or track rises and falls in volume as the limiter takes effect.

Limiters often contain knee settings as well, just like most compressors. A soft-knee setting means the limiter will have a gentler effect on the signal – the change from unlimited to limited signal will be smoother. Hard-knee limiting sounds a bit harsher and is a bit more noticeable.

Generally, limiters are only used sparingly during recording and mixing, as compressors are usually used to control the audio’s dynamics. But they can be used as ‘safety‘ devices in an audio signal chain, like I described earlier, to stop the signal from clipping or distorting.

For example, if I was recording a vocalist who had quite a wide dynamic range (the difference between the quietest parts and the loudest parts), it can sometimes be difficult to get the recording level just right on the mixing desk or the microphone’s preamp.

So I would insert a limiter after the mic’s preamp to help to catch the very loudest parts just before the signal goes into the red and distorts. But this technique should only be used as a last resort – I would first try to get a better recording signal at source, either by turning down the gain level on the desk/preamp, using a different microphone, or working with the singer on their microphone technique (like moving away from the mic when they sing loudly, and then moving closer when the sing softly).

If you’ve used a compressor on a track during recording or mixing, and you find that there are still one or two signal peaks that are getting through, an option is to place a limiter after the compressor in order to catch these peaks. Again, it’s another way of limiting audio and making sure that nothing is allowed to peak and distort in the recording.

An audio limiter is most commonly used at the mastering stage of a record, where the limiter is used as the last processing device across the whole mix. The ratio is fixed at ∞:1 – this means that as soon as the signal hits the specified ceiling level, it cannot go any higher. This is also known as ‘brick wall limiting‘.

A mastering engineer will use a limiter to boost the overall level of a finished track or album, and to squeeze as much volume out as possible. But it’s important to point out that the qualities of the sound are not affected – the only difference is in the perceived loudness of the track that you hear being raised.

As I described earlier, an audio limiter can be used in many different situations in your home studio, but mainly as a way to prevent any of your recordings or mixes from potentially clipping and distorting. It’s vital you avoid this if you want your music productions to sound clean, crisp, and professional.