The Different Types of Audio Connection Found in the Studio 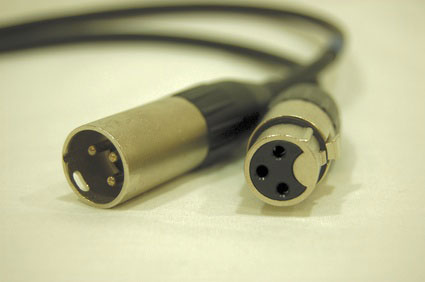 Knowing the type of audio connection to use between all of your studio equipment can be tricky, as there are so many different types that are used for specific reasons. Choosing the right cable can be a minefield if you’re not sure what connections go where and why they’re being used.

I’ve outlined the basic types below, along with some pictures that should make it much easier to remember the different cables and connections.

Balanced lines are much better at rejecting interference, which means they are less likely to be noisy and can run over much longer distances. They do this by twisting together two identical conductors (the part that carries the signal) and then surrounding them with a shield. The shield protects the conductors by picking up interference and sending it to ground. The twisted pair design also helps to minimize interference.

Here’s a list of the main types of audio connection that you’ll find in today’s studios. An XLR cable connection found in a recording studio will have 3 pins, and is a balanced connection. They are mainly used to connect microphones to other audio devices, such as on a mixing board or a microphone preamp. XLR cables can conduct phantom power of +48 V to condenser microphones as well.

Cannon were the first to develop this connection type – originally it was known as the ‘Cannon X’, a later version became the ‘Cannon XL’, and the ‘R’ came from the addition of a rubber compound. Hence, XLR.

These connectors are also known as jack connectors or jack plugs. Phone connectors come in a few different sizes – 1/4 inch (6.35mm) and 1/8 inch (3.5mm) are the most commonly used in the music studio.

They can come in various configurations as well, each one being suited to different scenarios. MIDI is carried by a 5-pin DIN connector. These are also known as phono connectors, and the RCA stands for Radio Corporation of America. An unbalanced mono connection, they can be used for both an analog and a digital audio connection (as well as analog video).

Also known as AES3. This type of signal can be sent over balanced XLR, unbalanced RCA, and fiber optic cable connections. The title stands for Audio Engineering Society/European Broadcasting Union, who both developed the signal. Each cable can transmit two channels of digital audio. S/PDIF stand for Sony/Philips Digital Interconnect Format. This is mainly used for consumer-level audio such as in digital hi-fi, CD players, or surround sound audio transmission, and is a consumer-level version of AES3.

S/PDIF refers just to the signal – it can be transmitted through unbalanced cables with RCA connectors, or through fiber optic cable with TOSLINK connectors (as seen below). TDIF stands for Tascam Digital Interconnect Interface. It’s an unbalanced connection, and a 25-pin D-sub connector (as seen below) can send 8 channels of digital audio in both directions, so you don’t need separate send and receive cables. They’re most commonly used on digital multitrack recorders.

ADAT cables have TOSLINK connectors at both ends.

As you can see, there are lots of different types of audio connection that can be found in the studio. But it’s likely you’ll only use a mixture of XLR, jack, RCA, and MIDI connections to begin with, and probably for some time. It’s certainly what I found. The use of digital audio connections in home recording studios is pretty rare – it’s likely you’ll be recording your audio to a hard drive rather than a specialist multitrack recorder, where digital connections are more commonly found.

How Do Synthesizers Work? Find Out All You Need To Know Here
How to Use a Control Surface to Interact with Your Production
What is a Music Sequencer?
What is an Audio Compressor?