Why AmpliTube is Great for Recording Guitars and Creating Effects

AmpliTube is a fantastic software program from developer IK Multimedia that uses amplifier modeling to recreate the sounds and textures of guitar amplifiers and effects. Amp modeling is basically a way of digitally reproducing the sound of analog circuits and components.

It’s not just guitars that can make use of the program. Being software-based, there’s a lot of flexibility with how it can be used. I know many producers that use the program for processing vocals, keyboards, drums – basically, any sound can be sent through any signal chain that you create inside the program. 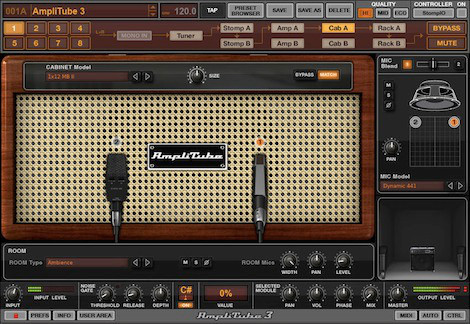 There are 160 different elements that you can fit together to be able to create the sound you want with the program. These include:

The control you have with these features is wide and varied. You can connect your effects pedals in whatever order you want, just like in the real world – the order can have a massive effect on the sound you produce.

There are many other highlights as well, including rotary speaker emulation (a similar effect to the famous Leslie speaker) and the inclusion of lots of bass guitar amps and cabinets that offers you some chunky low-end.

You also get special creative effects like Step Filter, Step Slicer, and Tap Delay. All effects parameters in the program are controllable via MIDI – you can connect a control interface to your computer to direct the dynamic movement of your effects with your hands instead of having to use a mouse.

One of my favorite parts of AmpliTube is the ability to place your microphones in any position you want in relation to the front of your chosen speaker cabinet. The mic’s placement affects the frequency content of the picked-up sound, impacting the overall tone.

You can also emulate the use of two microphones if you want. I think this is something that should definitely be taken advantage of. When I record guitar amps I tend to use a dynamic mic close to the grill and then a condenser mic a few feet away, combining the two signals at the mixing stage.

Playing with the combination of the two mics can change how the overall guitar sounds – you can now do this inside the software without needing any extra physical microphones. It’s also possible to change what reverb you use so that you can mimic different recording environments.

AmpliTube 3 is the most recently-released version, and there are also many add-on packs available to expand your sound-creation possibilities. They include:

…amongst others. For me, being able to recreate the sound of Jimi Hendrix is pretty amazing to say the least!

It would undoubtedly cost you a small fortune to have the same equipment in real life as you get in this software program. For this reason, and also for having such an amazing selection of effects and tools, it’s definitely one of my studio favorites.

And as mentioned earlier, AmpliTube (the link takes you to the official site) isn’t just for guitars – you can use the program as a big multi-effects library as well, to use as both a musician and a producer.